For Kellie, “It was an absolute pleasure to attend as a representative of the National Youth Science Forum and St Paul’s Anglican Grammar School in Warragul. The Oration is one of Victoria’s most prestigious public science events with fifty schools from around the state present at the proceedings,” she said.

Australian scientist, Professor Graeme Clark whose research led to the development of the Bionic Ear, founded the event and also spoke at the Oration. Sir Paul Nurse, Nobel Prize Laureate, President of the Royal Society and Director of the Francis Crick Institute in London was the guest speaker at this year’s event. Hayley and Caitlin recall Sir Paul talking of his humble beginnings and stressed the importance of perseverance and curiosity not only in science but also in all aspects of life. “Regardless of your upbringing, if you are determined to create opportunities for yourself, you can be successful in science,” he said.

Sir Paul’s presentation on Controlling How Cells Reproduce, focused on the scientific breakthrough that led to him being awarded the Nobel Prize and being responsible for placing the world one step closer to finding a cure for cancer. 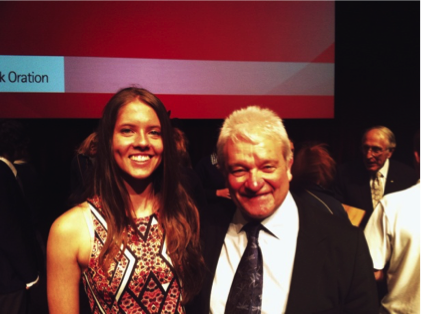 Maffra Secondary College in Victoria was awarded the Graeme Clark Science Award in recognition of their innovative school science program that works to promote science within their community.

After the event Kellie was fortunate to talk further with the guest speakers about their research and their opinion of Australian science. “I cannot express the sheer value of having such events available to the public. I urge all who are interested in science to attend the 2016 Oration as the event not only serves to heighten one’s knowledge but it also acts as a spark of inspiration to the scientists of the future.”

The University of Melbourne, a partner of the National Youth Science Forum, is a major sponsor of the Graeme Clark Oration.

Cochlear, the company founded as a result of Professor Clark’s research, is also a funding partner of the National Youth Science Forum. 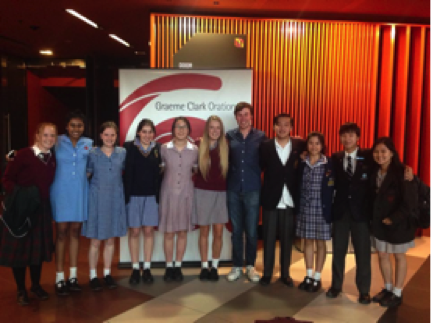 Further information is available at www.graemeclarkoration.org.au.