Solving the problems of tomorrow, today, with Rotary

Rotary is the founding partner of the National Youth Science Forum (NYSF) and has been supporting initiatives all around the globe to not only make the world a safer place, but a more equitable, hospitable planet for generations to come.

Participants of the 2022 NYSF Year 12 Program had the opportunity to hear about some of the amazing opportunities within Rotary and the life-changing work Rotary is currently involved in around the world.

The session opened with an inspiring introduction by the Rotary International Director, Dr Jessie Harman, highlighting the vital role STEM experts play in the world, and how Rotary has supported initiatives worldwide for over a century. Dr Harman also gave our participants six fun facts about Rotary and Rotary's involvement with STEM:

Fact 1: A mining engineer was one of the four founders of Rotary in 1905, highlighting the deep significance and recognition of STEM within the organisation.

Fact 2: Rotary funds research into solutions to problems that afflict that world, and Rotary’s purpose is to make the world a better place.

Fact 3: Rotary is a very large, global community with 1.4 million Rotarians hailing from more than 200 countries across the globe.

Fact 4: Rotary works with some of the world’s largest charity and philanthropic organisations including the WHO, UNICEF, and the Bill and Melinda Gates Foundation, which help to magnify the reach and impact Rotary can have around the world.

Fact 5: Rotarians made the decision in 1987 that a global effort was required to eradicate polio. At the time there were 350,000 cases of polio all around the world, and since that time, polio cases have decreased by 99.9%.

Fact 6: Importantly, Rotary help budding young scientists start their career in STEM by supporting foundations such as the NYSF to invest in young people and their future.

Dr Haman concluded her talk by encouraging participants to enjoy this NYSF program, learn as much as they can, and go out and have fantastic careers in science, technology, engineering, and maths; whatever STEM career floats your boat.

"I hope at some point throughout your career you will think of Rotary - because just as the world needs more scientists, it also needs more Rotarians!" 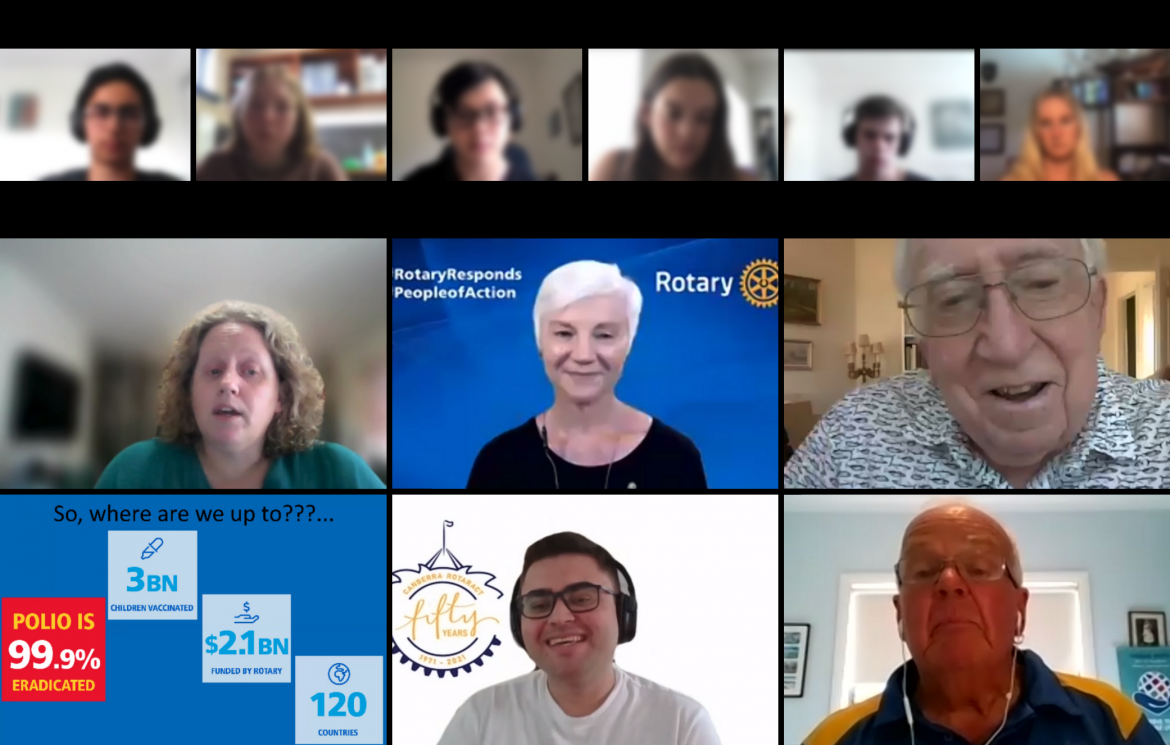 The participants were humbled to hear from John McCaskill, Chairman of the Rotarians for Bees initiative. Rotarians for Bees brings together Rotarians who are concerned about the severe decline in bee and other pollinator populations around the world and aims to increase awareness and take action to reverse this trend.

“[The initiative] epitomises the importance of pollination and its link to everything in our ecosystem. In fact, 1 in every 3 mouthfuls of food we have, rely in some way on pollination of bees.”

With the rapid increase in urbanisation and the sharp drop in greenery/green cover over the past several decades, bee populations have suffered and the bee industry needs keen young minds to solve these problems, according to John McCaskill.

"I’m hoping some people out there might consider environmental science or agricultural science to consider some of those problems confronting the bee industry.

The bee industry needs young scientific minds like those watching today, to make the changes in environmental and agricultural sciences to save the bees!"

The Year 12 cohort also heard from Ken Hall, President of Rotary Club 9650, and Dr Danielle Stanisic, an immunoparasitologist and member of the Rotary Satellite Club of Griffith University.

Ken Hall highlighted to participants the immense role Rotary has played in the effort to eradicate poliomyelitis (polio) and the incredible progress that’s been made as we march towards its total eradication from the planet.

It’s not an easy disease to eradicate, but we are getting closer and closer…

Rotary has committed $US 2.1 billion and countless volunteer hours towards eradicating polio, and it is [currently] 99.9% eradicated.

Today, there are only two countries in the world where polio is endemic (Pakistan and Afghanistan), and Rotary and partners hope to eradicate polio within 5 years.

In addition to their work to eradicate polio, Dr Stanisic introduced the participants to the work Rotary and its partners are doing in the fight against malaria.

Millions of people are infected with malaria each year and hundreds of thousands lose their lives. While Australia has been declared malaria-free since 1981, it is still a major health burden across the world exacerbated by the medical and educational inequalities found throughout much of Africa and Asia.

Dr Stanisic explained how [parasitic diseases] are more complex than bacteria and viruses, which makes them difficult to vaccinate against. However, Dr Stanisic remained optimistic and pointed to the incredible investment Rotary has made towards vaccine development, grassroots education, and treatment options such as the distribution of insecticide-treated mosquito nets to Papua New Guinea and Timor Leste.

Thanks to the investment by Rotary over the last 30 years, Dr Stanisic and her colleagues have developed promising whole-parasite malaria vaccines, which have just completed early clinical trials where a large portion of patients are now considered protected against malaria.

As many vaccines are limited by shelf life and strict storage requirements, the researchers have also developed a field-deployable version of the vaccine where it can be freeze-dried into a powder, [taken] to the field, reconstituted with water, and distributed as needed.

A phenomenal outcome, which will hopefully see the eradication of malaria.

A recurring theme to the NYSF Year 12 Program is participants asking how they can get involved with the NYSF or our partners. The session concluded with an informative talk from Tanul Anand on Rotaract - a global organisation that empowers students and young professionals to create positive and lasting change in themselves, their local community, and around the world. Tanaul is a member of Rotaract in Canberra and explained how membership has allowed them to give back to the community, grow personally and professionally, and also have an incredible amount of fun at the same time!

Tanul Anand went on to demonstrate how far-reaching the impact Rotary and the Rotaract can be, whilst also having a vibrant and diverse range of fundraising opportunities and initiatives. Nothing is off the table with Rotaract, and they do everything from fundraising barbeques to activities supporting those with a disability. Rotaract has something for everyone and tries to appeal to as many people as possible to spread awareness and encourage inclusivity amongst all walks of life.

Rotary has supported the NYSF since its inception 38 years ago, and we could not be more aware of the incredible contribution Rotary has made to the 1000s of NYSF alumni, and also to millions around the globe. Alongside Rotary, the NYSF will continue to support initiatives to make STEM careers and study options more appealing and more accessible to future generations, to help solve the problems of tomorrow, today.