The first science visit for the Session C engineering and advanced manufacturing group ‘Newton’, was a visit to ANU’s College of Engineering and Computer Sciences. Here Matthew (an NYSF 2012 alumnus) and Theresa, an ANU Physics undergraduate and an ADFA UNSW Mechanical Engineering undergraduate respectively, ran the workshop on behalf of Robogals. Robogals is a student-volunteer based organisation that encourages primary and secondary school girls to get into engineering and technology, through workshops such as the one delivered for the NYSF.

The robots used in the workshop were Lego Mind-Storms, and although most of the group had used them before, the session was anything but ordinary for the young scientists. The first exercise was to demonstrate how exact instructions had to be for a low-level thinking machine to process. One participant, the ‘programmer’, had to instruct two others to draw a symbol they had never seen, with their eyes closed. Whilst one ‘robot’ participant managed to do a fairly accurate job, the other ‘robot’ became a little confused by the programmer’s instructions… 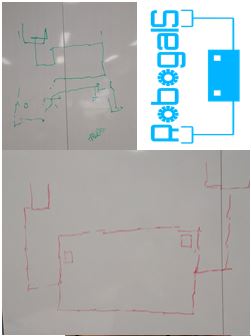 Next, they flashed coloured cards in front of the robots' sensors to instruct it which way to move, which was the basis of the program they went on to start using. The group’s goal was to program their robots to complete a maze, with all successfully completing the task. From here, the instructors showed the participants how to modify the program so the robot now created sound when its sensor moved over a certain colour. Suddenly the engineers were musicians as they began replicating nursery rhyme tunes!

Matthew brainstorming with the group

The last half hour was special to the group, as they were given the opportunity to problem solve concepts set by the presenters. Matthew worked with a group to figure out a way to program the robots as an etch’n’sketch, combining their usual program with paint and having the robot's trajectory tracked on the screen. Theresa was helping the students figure out a way to program the robots to follow their hand movements. Both groups were brainstorming ideas, and going through the trial and error process to figure a solution. Although the groups did run out of time to complete their projects, they agreed this section of the afternoon was definitely the most challenging, having never been given this opportunity when using the robots before.

To find out more about Robogals, check out their website: http://robogals.org/. 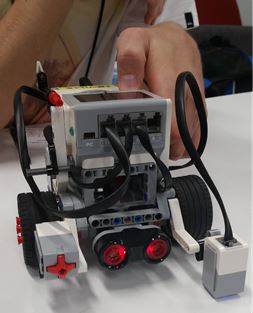