Session C kicked off two days later, and this Opening Ceremony was significant because of our announcement that Lockheed Martin Australia was coming on board as a major sponsor of the NYSF for 2015-2016-2017.

The NYSF Science Patron, Chief Scientist for Australia, Professor Ian Chubb again welcomed the students and encouraged them to continue their studies in science and to grab with both hands the opportunities and experiences they would have over the coming 12 days at the program.

Lockheed Martin Australia’s Chief Executive Raydon Gates explained the company’s motivation behind supporting the NYSF for the next three years, and was as generous as Professor Chubb in sharing insights with students who wanted to know more about the opportunities available in STEM careers. 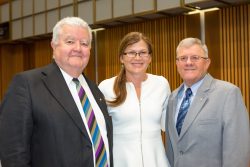 Waiting for the Opening Ceremony to begin 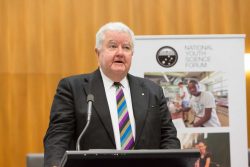 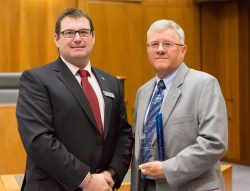 Our special guests at this Opening Ceremony were three alumni of the program:

Flying Officer Kim Shearman attended the NYSF in 2006, returning as a student staff member and ultimately the senior staffie for the program. He studied at the Edith Cowan University, and is now a Flying Officer with the Royal Australian Air Force flying fast jets. Kim is converting to F/A-18 Hornets later this year.

Clare Paynter, who attended the NYSF in 2009, and moved to the Australian National University from Darwin. Clare has recently completed her Engineering degree and has much more than a passing interest in renewable energy; she has recently moved to Melbourne to take up a place in the three year graduate program of the Australian Energy Market Regulator.

Brody Hannan, who attended the NYSF in 2014, was selected to attend the London International Youth Science Forum in 2014, and will return to London in July as a staff member. Brody has opted to also study at the ANU doing Advanced Science, and is also one of the six NYSF alumni awarded a Tuckwell Scholarship for 2015. Read more about Brody's NYSF experience here. All three of our alumni guests said that they valued sharing their stories with the students as well as the opportunity to reflect on what they had been doing since attending the program. 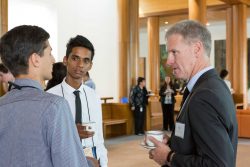 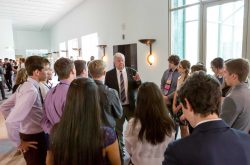 Professor Chubb holds forth with students 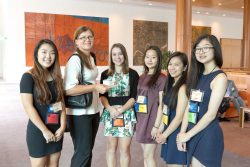 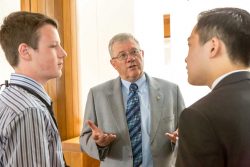 Another round of engaging and exciting lab visits and site tours, discussions and social events followed for Session C. The Rotary Dinner speaker, Dr Renee Kidson, (alumni 1992) inspired the students and other guests with her message of continual re-invention and up-skilling to manage the transition through an exciting career of research, travel, teaching and policy development.

The dinner also featured the award of the Bruce and Lois Sharp award to former NYSF Council member, Bob Greeney. 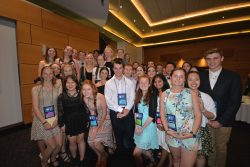 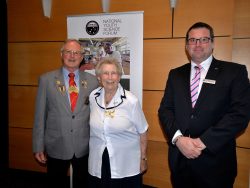 The Session C Science Dinner included the Indigenous Knowledge and Engagement Symposium, with the overall aim of placing western science within the context of Indigenous knowledge. This event was sponsored in part through IBM’s Diversity program, and we acknowledge their support. IBM has been involved with the NYSF for several years, and understands the importance of encouraging students to think about science, engineering and IT careers.

Our special guest at this dinner was the newly appointed Parliamentary Secretary for Industry and Science, the Hon Karen Andrews, MP, who took opportunity to mix with the students and NYSF funding partners. 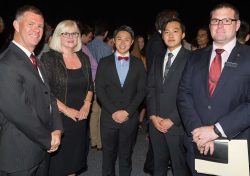 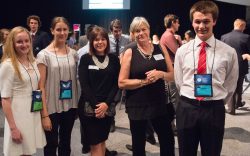 Students with Penny Calvert and Caroline Bradshaw from ANU Science 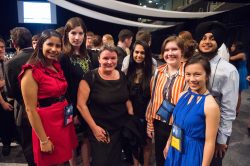 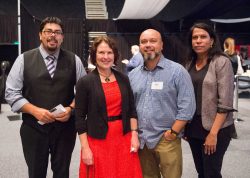 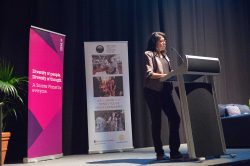 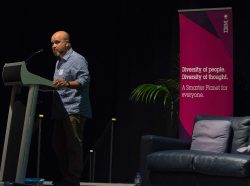 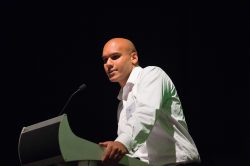 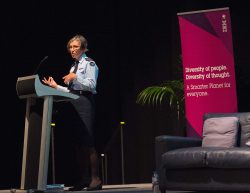 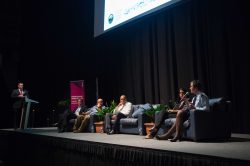 Stories about many of the activities in January are available on our website (www.nysf.edu.au/news) – take a moment to explore to learn more about what the 2015 cohort learned.