Seeing into the Past

“I guarantee [that] you’ll never feel the same ever again”

The alarms go off at 4:00. Sleepy NYSFers from Session C  make their way down to the bus that will act as a time machine, taking them back in time to see the creatures that roamed the land, or rather seas, of NSW 400-370 million years ago…

The NYSF fossil dig day is very popular … sometimes after the fact, due to its early start. But few come back without having been inspired by the opportunity to test their archaeologist's skills. Our first stop was near Cowra, where we searched for trilobite fossils within rocks mined from a quarry in Forbes. Trilobites are extinct crustacean-like animals that were once one of the most numerous and successful creatures of the Palaeozoic Era, living 542-251 million years ago, and are related to arthropods such as spiders and scorpions. 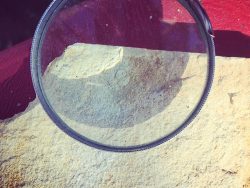 Students found fossils of all shapes and sizes depending on which part of the trilobites were preserved in rock. Students took their pick from piles of rocks that had been transported from the quarry, sometimes in competition with who had the largest rocks, and it wasn’t long before they started to find fossils – even if they had to work hard at several rocks before anything turned up inside.

The process of hunting for fossils sounded so simple:

And yet it was a life-changing experience to be the first human to ever lay their eyes on a little critter imprinted on the rocks. 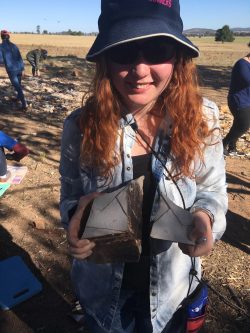 By the end of the session, everyone had a fossil to show off to our palaeontologist guide, Dr Alex Ritchie, and to take home. Emily, NYSF 2018 student even found a graveyard! The Darwin students were eager to show off their fossils after their hard work.

Our next stop was Canowindra to take us back to the Age of the Fishes (370 mya). Canowindra's unique fossil fish deposit was discovered by chance in 1955, when a council road worker, who was grading an unsealed road between Canowindra and Gooloogong, turned over a large rock slab with strange impressions on its under surface. While he was asked to dispose of it along with all the other rocks, he pushed the slab aside where he left it upturned. It was later spotted by a local bee-keeper who had initially sat on the rock to eat lunch when he recognised its importance.

In 1993, Dr Ritchie led an exploratory dig to rediscover the source of the original fossil fish slab, digging up most of the road to do so.

“Most of the secret is under the road” – Dr Alex Ritchie Dr Ritchie brought students to "the bend in the road" where the Canowindra fish fossils lay beneath them and told the fascinating story of their discovery. Also, note his coprolite t-shirt (i.e. fossilised poo).

Thousands of  “armoured” fish lived together in a freshwater lake 370-60 million years ago, and adults and juveniles alike perished as the lake dried up during a drought. They were then rapidly covered with sediment that eventually hardened to rock, which has preserved them ever since. Dr Ritchie’s team found four thousand fish in the area that they uncovered, including one fish new to science, and two only ever found in Antarctica prior to 1993, whereas others are common in fossils around the world. The biggest fish, Mandageria fairfaxi, was 1.6m long and is now the state fossil emblem of NSW. Many of these armoured fish were similar to our ancestors in that they had begun to develop structures similar to the human arm, and they illustrate the remarkable story air-breathing fish with fins evolving into fish with feet and our distant ancestors first stepped onto land.

“There has never been a site like this dug up in the world, maybe never will be again. It’s fantastic!” – Dr Alex Ritchie

Dr Ritchie’s dream is for the entire area of land to be excavated and preserved as an archaeological site so that people around the world can walk over thousands of fossilised fish and even help to crack open rocks and make casts of fossils themselves. Perhaps the NYSF students of 2018 will one day return to the “bend in the road” to dig up more secrets as there is still so much waiting under the ground to be discovered.

We were surrounded by excavated rocks displaying fish from the past. Students witnessed the evolution of armoured fish into our distant ancestors and could feel the impressions of the fish left behind for posterity. Hopefully students will one day return to Canowindra to discover more about the Age of Fishes when the entire area becomes a monumental archaeological site.

Watch this video of the students' visit.