“… really motivated me to push myself to get to where I want to be and has given me a reminder of how good school/education can be.”

Four students from Aboriginal and Torres Strait Island backgrounds were supported by Rio Tinto to attend the National Youth Science Forum in January 2015.

Sarah from Western Australia, Thane from Queensland, Connor from the Northern Territory and Bronte from New South Wales, all immersed themselves in the program.

Each of the students has diverse interests in science, allowing them to gain from the variety of lab visits and site tours available from the NYSF program.

NYSF Chief Executive, Dr Damien Pearce, says the funding available from Rio Tinto to support the students' attendance was extremely valuable. “This kind of support from the Australian corporate sector provides extra opportunities for our young people, and we can not thank Rio Tinto enough for their investment in the future.”

Sarah came to the NYSF in January with a strong interest in animals and zoology and enjoyed the opportunities to visit the ANU’s Department of Zoology, and the CSIRO’s Australian National Wildlife Collection, as well as the Bungendore Veterinary Clinic where the NYSF students were shown some of the key aspects of a modern large animal clinic. Sarah says attending the NYSF, “… really motivated me to push myself to get to where I want to be and has given me a reminder of how good school/education can be.”

Sarah is aiming to study a Bachelor of Science at the University of Western Australia, majoring in Zoology or Biology.

Connor from the Northern Territory is planning on studying a Bachelor of Science, Chemical Systems at the University of Melbourne. “I believe the session jump-started me back into the academic aspects of my lifestyle before school started this year. This really helped me become motivated for my year 12 studies.”

Connor enjoyed the visits to the ANU Chemistry Department and ACTEW Water Treatment Facility at Cotter Dam. “The dam was informative in showing how chemistry comes in when treating water for a city.” Bronte from Gerringong, New South Wales, came to the NYSF interested in studying physics, and was able to visit the ANU’s Physics Department and Research School of Physics, as well as the Mount Stromlo Research School of Astronomy and Astrophysics.  Bronte showed leadership on session in conducting the Acknowledgement of Country at Parliament House and the Science Dinner (Session C).  Bronte hopes to pursue a career in the area of Quantum Physics. 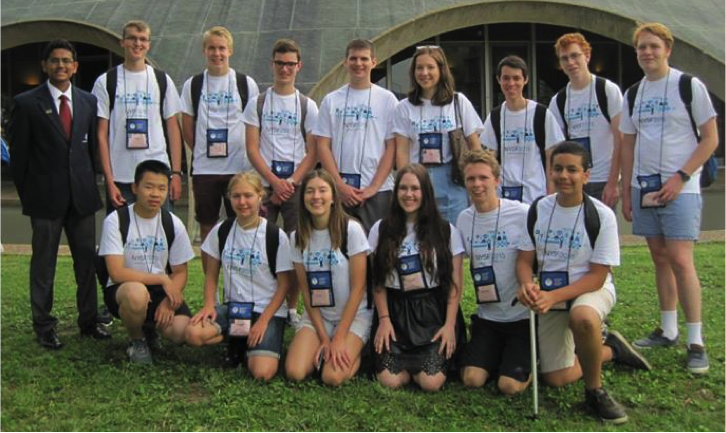 Bronte with her interest group at NYSF 2015 (image supplied)

Thane from Queensland is interested in further studies in science and engineering and during the NYSF in January was part of a visit to the Tidbinbilla Deep Space Network outside of Canberra. “What I enjoyed the most about the visit to the satellite tracking station was getting to see the gigantic satellite dishes that NASA uses and to learn a few things about the station itself and what it has done and what it is going to do for future space projects.