Visiting the Centre for Microscopy and Microanalysis facilities at the Australian Institute for Bioengineering and Nanotechnology in Brisbane gave the NYSF 2018 Session B students of Newton, Fenner and Hill groups (physics and biomedical groups) some hands-on experience with world class technology. For their visit, the lab was divided into several stations, manned by PhD students and postdoctoral researchers with thousands of cumulative hours of experience to share. The next few hours were like a Magic School Bus trip to the molecular scale. The first group was shown both scanning and transmission electron microscopes, which allowed them to view objects such as abalone shell, clothing fibre, and a fly’s eye at minute scale. In these machines, objects are magnified so powerfully that features measuring on the micro to nanometer scale are easily visible. Students moved on to learn about the limitations of this kind of technology, and the different steps that have to be taken to preserve, stain and image biological samples.

At another station, the group was shown how focused beams of ions in microscopes can be used for the removal (ablation) and deposition of material. These were used to stunning visual effect in engraving a microscopic NYSF logo onto metal, but have are far more practically used to fabricate nanoscale devices such as thermoelectric plates for sustainable energy technology. 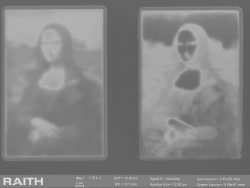 Long tours like this, where groups are demonstrated to and must remain on their feet, can produce in students what a biologist might call ‘torpor’. But as the NYSFers progressed through the different stations at this visit, there grew in them a kind of meditative stillness. It was visible in the researchers as well, and it is hard to imagine avoiding the feeling in an occupation like theirs, where huge machines are used to observe the invisible inner workings of the world’s tiniest creatures. But if there had been something zen about the work until this point, then the final station described a sort of gothic torture.

Robyn Chapman described work she performed for the Van Gogh Museum in Amsterdam, slicing the meanest dust from the surface of a tiny yellow paint fragment of Sunflowers. Her first step was to layer the laboratory surface in white paper, lest the tiny flake blow away from the microscope stage (e.g. in the event that a moth took flight in an adjacent building). As layers of paint were slowly stripped away, the fragment was imaged, providing insight into the way that Van Gogh’s unique paint mix ages and bubbles, and aiding in its continued preservation. Eventually, the yellow speck was sent on to be studied and analysed in labs elsewhere in the world.

The CMM facility at the AIBN did an amazing job of introducing the NYSF students to the vast range of applications for microscopy, from engineering to biomedicine to post-impressionist art. Students and staffies alike left stunned by what they had seen.