On The Edge Of STEM- Specialist Lecturers, Their Journeys, and Their Research

'The amount of possibilities still available in such specialised fields is incredible. It was also useful to see all the different pathways you can take to get to where you want to be' Student Hayden on Hayley Teasdale's specialist lecture

On Monday, students from NYSF Session C were invited to attend one of four lectures, presented by leading researchers in their respective fields. These talks were designed to expose students to a variety of different disciplines, and provide an insight into new and emerging research.

Dr. Rose Ahlefeldt is a research fellow at the Research School of Physics and Engineering at the Australian National University. Originally from Armidale, Dr. Ahlefeldt has worked around the world, including in Paris and Montana. Her lifelong passion for invention and thinking outside of the box has translated into a broad science career in which she applies fundamental skills to abstract concepts. In 2018, she was recognised as the ACT Scientist of the Year.

Currently, she is using lanthanides (a group of elements numbered 57–71 on the periodic table) to develop a new way of storing information, known as quantum memory. It is hoped that in the future, instead of storing information on a computer which uses simple 1’s and 0’s, information could instead be stored in the space between two atomic orbitals. During the presentation, students participated in calculating the Doppler wavelength shift of a galaxy, using a mobile spectrometer, and observing the absorption of a variety of crystals. 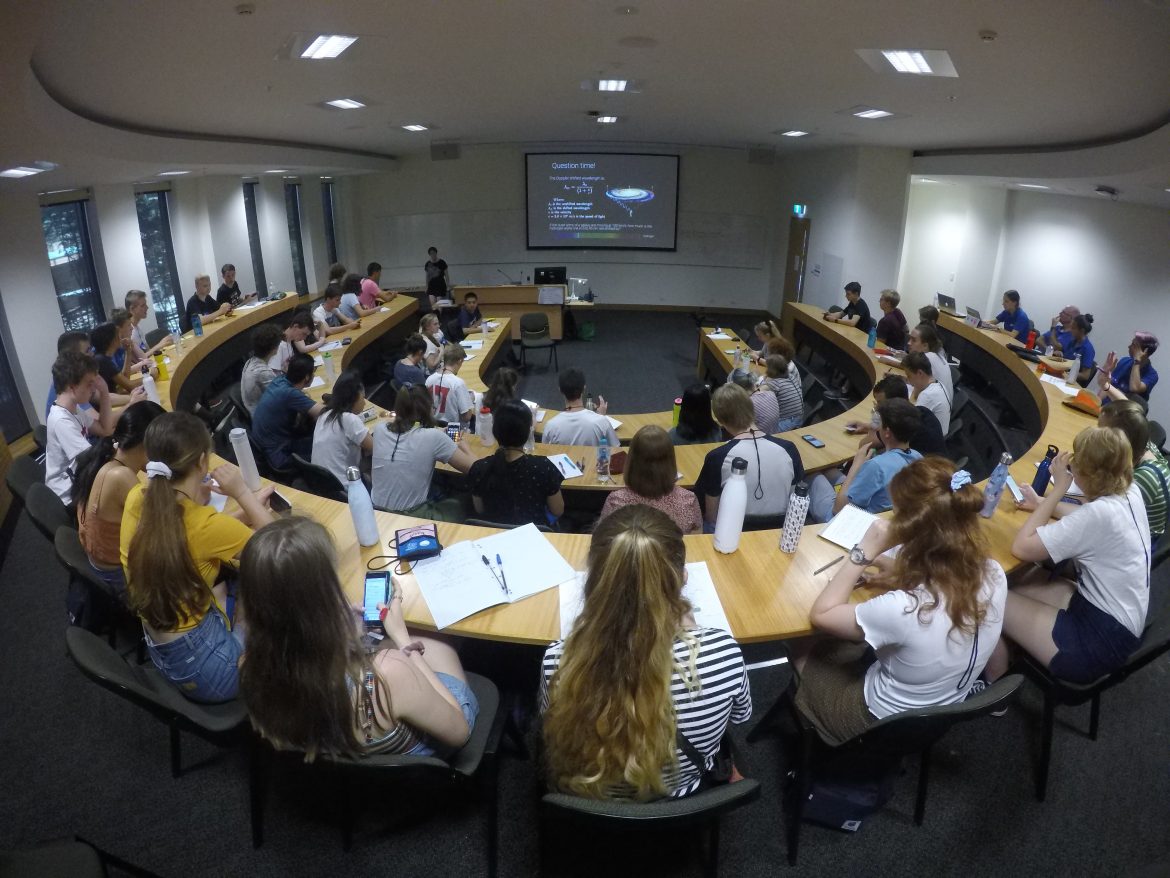 Who knew that you could replace your sense of sight with tingles on your tongue or that a weekend in the countryside can significantly improve learning capability? This is the power of neuroplasticity, a concept that Ph.D. Candidate Hayley Teasdale is exploiting to enhance the proprioception of Parkinson’s Disease patients. Proprioception is the awareness of the body’s position and movement and is critical for human balance.

Accompanied by Alvie, a gorgeous Golden Retriever cross Poodle Therapy Dog, Ms. Teasdale demonstrated to NYSF students the concept of the neuroplastic brain. Ms. Teasdale uses a technique called transcranial brain stimulation to improve the balance of people who are at risk of falls due to neurodegenerative diseases and detailed the findings of her Ph.D. on this technique. 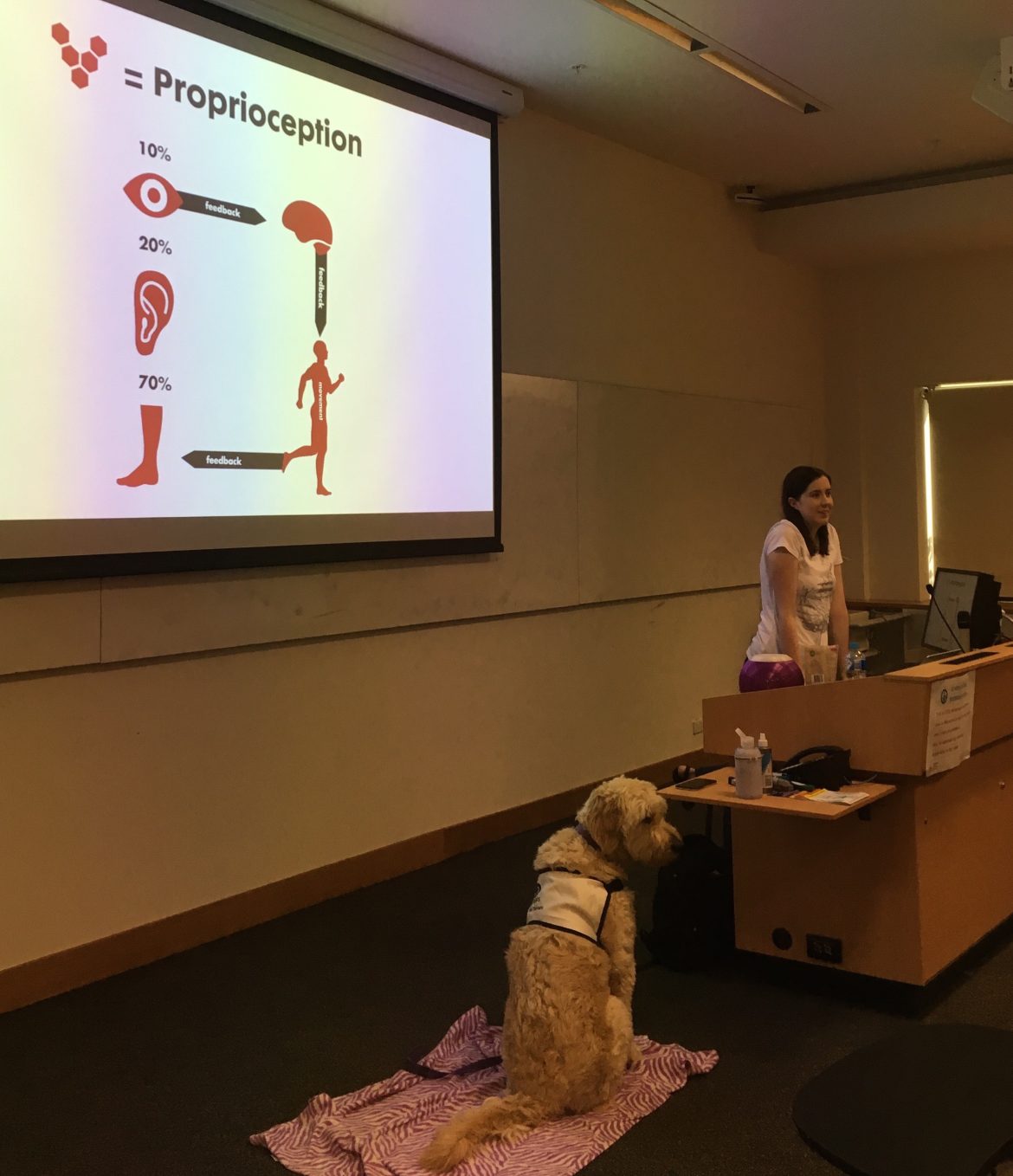 Ms. Teasdale also encouraged the NYSF 2019 students to consider the entrepreneurial possibilities of science. Through the program   Innovation ACT, Ms. Teasdale has collaborated with roboticist David Hinwood in developing a dynamic ball that gives instantaneous feedback to the user to improve balance. Their project was one of the two winners in the Falling Walls Lab competition in September, which saw her presenting in Berlin later in the year. This is a great example of different STEM fields intersecting to form a marketable product.

The interest of NYSF 2019 students (for both Ms. Teasdale's talk and Alvie) was visible, as many students patiently waited to have a one-on-one conversation or personally thank Ms. Teasdale at the end of her talk. Professor Michael Platow is the Associate Director of Science Education at the Australian National University, having joined the institution in 2003. As a psychologist, his interest is in the theoretical frameworks that underpin leadership, prejudice, trust, and social influence. In his lecture to the NYSF 2019 students in Session C, he introduced the science of psychology as measured through objective behaviours and physiological responses. The nature of social influence, as his area of expertise, examines the element of control or power that people have over others.

Prof. Platow talked in detail about an experiment he performed over 20 years ago, that explored just how deep the influence of others can affect our own perception of pain. Participants in that study (who were science students) held their hand in iced water for a period of time, eliciting a pain response measured by their expression of stress as an elevated skin response. During the first trial, an actor interrupted, and introduced themselves as either a fellow science student, or an arts student, saying that the second trial of ice water was much easier to bear.

Interestingly, students who were informed of this by a science student found the second trial much less painful and stressful, whereas students who were told this by an arts student had a heightened stress response the second time around. The control group, who had no student interruption, stayed mostly consistent. What this experiment supported was the notion that we are easily manipulated by those around us, especially so when we share common ground on which trust is based.

Dr. Roslyn Prinsley works in the Research and Innovation branch of the Office of the Deputy Vice-Chancellor at ANU, as the Head of Strategic Research Initiatives. With a background including a Ph.D. in Photosynthesis, and a job as National Advisor to Australia’s Chief Scientist, her talk was focused on the various ecological aspects of sustainable agriculture.

Dr. Prinsley discussed her work in advising forestry in agriculture, planting certain types of trees on farms in order to attract multiple benefits to align with Australia’s natural climate. In her lecture, Dr. Prinsley also highlighted the dangerous worldwide vulnerability we are faced with in relying on just a few staple foods to feed our growing global population.

The presentation also involved students watching three video pitches of 3-minutes each from the ANU's Grand Challenge Scheme in 2018 to decide which ANU research group should be granted $10 million. The videos were focused on personalised medicine, zero-carbon energy, and artificial intelligence. Interestingly, the student panels all unanimously agreed that zero carbon energy deserved the grant. The idea of improving quality-of-life was brought up, and the consideration was that while personalised medicine would be an incredible leap forward, doing all that we can to limit the effects of climate change should be a priority for the planet and the global population. Considering that zero carbon energy won in 2018, it was a fantastic experience for these future scientists to gain an understanding of the competing priorities in decision-making on science funding. 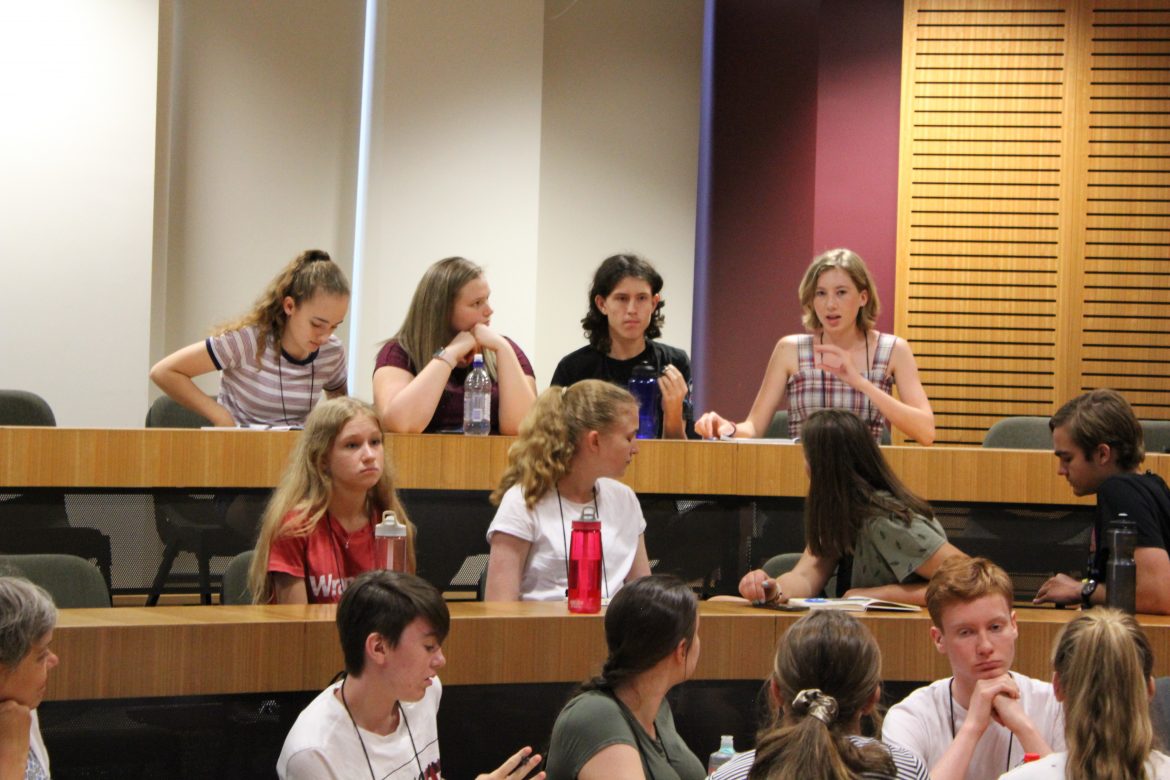