The NYSF at Science Meets Parliament 2018

Kylie Walker, Science & Technology Australia’s CEO confirmed a record number of Scientists in attendance for the 19th consecutive year of the event. She opened with a warm welcome for all to “light a spark, build understanding and make a connection – the next few days are ripe with opportunity”.

This year’s Science Meets Parliament proved another valuable opportunity for scientists, technologists and cience organisations alike. For the National Youth Science Forum, Science meets Parliament presented the opportunity to meet with some of Australia's most exciting scientists, both established and up-and-coming, and to gain an understanding of how scientists can work with politicians to advocate for their work in the public policy space, with the goal of creating an informed, scientifically literate Australia.

On the first day, we heard a number of inspiring talks and participated in workshops and networking events. The key theme of the first day was to “practice your pitch” and included the opportunity to practice talking about your work with the other attendees at the event. This was in preparation for the culmination of the event where we would be meeting with a Parliamentarian to discuss our work in science.

For our readers from the science community who may find themselves needing to advocate for their work to a broader audience, there were a number of valuable take home messages. Australia's Chief Scientist Dr Alan Finkel in his opening address used the analogy that the relationship between science and parliament is similar to a marriage. He discussed the importance of considering the following four points to ensure a “happy marriage”:

Further advice from a panel made up of ABC political journalist and President of National Press Club, Sabra Lane, A/Prof Megan Munsie from Stem Cells Australia, Jane Urquhart, Department of Industry, and moderated by Misha Schubert, Universities Australia, was to approach politicians and policy debates with a solution rather than a problem, to make sure to listen and tailor your approach to those you are approaching, and to use storytelling to craft a memorable message. The panellists also talked about making the science “digestible” for those without a science background, and how this shouldn’t be seen as “dumbing anything down”, rather as being vital for advocacy success. On the second day, it was time to meet our Parliamentarians, with meetings scheduled throughout the day. In addition to this, the day included further talks and panels, and we had the good fortune to hear from Professor Emma Johnston, the President of Science & Technology Australia, who presented a moving key-note speech at the National Press Club. In her address she called for the celebration of an Australian cultural identity that had science and technology at its core.

“Science and technology skills are increasingly important and Australia’s falling enrolments and average results in STEM subjects are leaving us unprepared as a nation. If Australia is to survive this accelerating pace of change and remain a strong, independent and connected country; we need to sit in the driver’s seat -and that is a STEM seat.” - Professor Emma Johnston 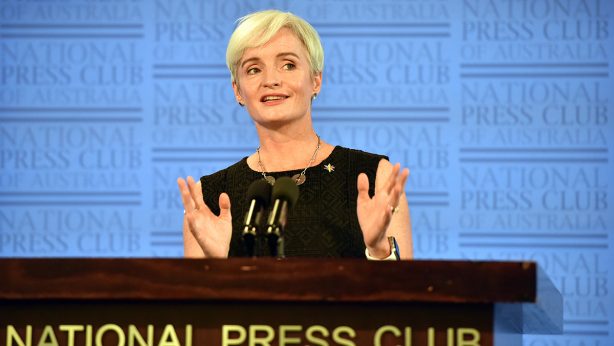 Sian Keys, Acting Programs Manager at the NYSF also attended the event, summarising her experience: “Professionally and personally, I found this a hugely beneficial experience. While personally I already had the skills to pitch my work briefly and in a relevant manner, I found the opportunities to practice those skills on a range of audiences and expand my networks hugely beneficial to my professional skill set. It's rare that you have the opportunity to be in the same room as so many incredible people in both the science and political fields, so the opportunities to talk to and learn from them was immense. And the opportunity to meet Professor Michelle Simmons, the Australian of the Year, was an incredible icing on the cake for me!”