The Göttingen science camp was an absolute eye opener for me

NYSF 2016 alumnus Tom Houlden participated in the XLAB International Science Camp hosted at The University of Goettingen, Germany in June this year, and recalls his experience.

“Nineteen students attended XLAB International Science Camp in Göettingen, Germany, coming from eight different countries across four different continents, speaking roughly twelve different languages. It would be a feat to distinguish what was more impressive - the cultural cocktail achieved in this experience or the huge variety of scientific activity, from experiments to lectures, or tours to presentations by esteemed scientists. The Göttingen science camp was an absolute eye opener for me - actually being on the frontier of science; I was extremely fortunate to have this experience at the perfect time in my life. It gave me a chance to assess the reality of my intentions for the future, while I still have time to consolidate them. This camp provided a glimpse into what research is actually like, the failures, the tedium, the obsession with detail, the endless data collection, the successes and most importantly, the dedication to ‘finding things out’.

The three-week camp comprised of three individual one-week courses designed to target sub-fields in biology, chemistry and physics. I spent my three weeks primarily in the biology department, taking courses in neurophysiology, molecular biology and immunology. A goal of these courses was to expose us to current research methods and technologies in these fields. Because of this objective I now have a relatively good knowledge of exactly what methods I can use to analyse blood samples for specific antigens, genetically alter bacteria, stimulate neuron signals and analyse the visual system of insects amongst other very fundamental scientific practices.

The highlight of the experience might have been, narrowly, my time working with bacteria in the molecular biology course. Here I inserted DNA containing genes removed from florescent jellyfish into bacteria which I cultivated and watched as they began to become fluorescent under ultraviolet light. 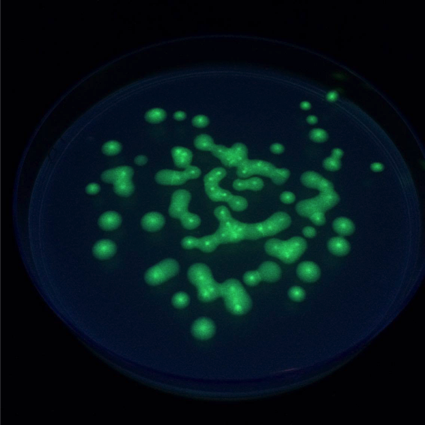 We then analysed the process that bacteria, like humans, undergo to produce proteins (in this case, ones that glow in the dark) from genes. Here I conducted different experiments on the bacteria, isolating the DNA, other genetic material and eventually managing to separate the proteins themselves. This process not only confirmed the theory which I studied extensively back at school with a real life demonstration of this process which had fascinated me so much, but it also managed to consolidate my passion for this kind of scientific enquiry.

As well as the strong scientific element of the course, we also had the opportunity to discover nearby parts of Germany. Visiting historically significant towns such as Goslar, culturally rich towns such as Kassel and sobering sites such as the Buchenwald concentration camp, we managed to get a feel for the country outside of the scientific hub where we were living. It is these visits and immersion into the German culture (which apparently flourishes at the time of the European Cup which fortunately coincided with our trip), which has forced me to consider looking at Georg-August-Universität (the university that Göttingen is famous for) as a destination for further studies in the years to come.

XLAB was a place where my passion for science was able to collide with the enthusiasms of my international peers. Ultimately I have come away with a renewed sense of direction in terms my aspirations for a scientific career as well as a newfound passion for connecting with others from across the globe, particularly in regards to my concreted understanding of science and human exploration in general as an international endeavour.”