“It was very exciting to be involved with this world-class facility.”

Rebecca Johns attended the NYSF (then called National Science Summer School (NSSS)) in January 1990, and was totally inspired by her time. Not only because of the variety of research labs and scientists she visited and learned from, but for the enthusiasm of her fellow students for science in its many forms.

“I came from a small rural high school in Mossman, North Queensland and gained a lot from the opportunity to mix with different people with big dreams. My experiences at the NSSS encouraged me to apply for a Bachelor of Science at the University of Queensland after finishing high school.”

Rebecca also enjoyed studying physics and maths in her first two years of university but found her real passion was for chemistry. “I ended up gaining first class honours after working with Dr Trevor Appleton on cis-platin compounds in my honours year. I also received a scholarship to participate in a summer research session back at The Australian National University (ANU) at the end of my third year, which brought back many memories of my time at the NSSS.”

After completing her honours year, Rebecca wanted to experience something different. She started working as an analytical chemist at an aluminium smelter in Tasmania. “After nearly two years in this position, where I was involved in both regular environmental monitoring processes and quality control of different instruments, I was transferred to the research section working on developing a more effective electrolytic cell design. Not long after my transfer the government cut research and development support. My department lost a number of staff, including me.” This sudden change in circumstances prompted her to return to university, after receiving a scholarship to undertake her PhD studies. “My environmental monitoring work at the smelter had sparked my interest in the atmosphere and I was able to immerse myself in a project investigating the effect of non-methane hydrocarbons in baseline air. I worked for the CSIRO Division of Atmospheric Research at the Cape Grim Baseline Air Pollution Station and the University of Tasmania. Cape Grim station is located on the western tip of Tasmania and receives the cleanest air in the world. This is where baseline carbon dioxide, methane, and CFCs have been measured for many years and shown to be increasing. It was very exciting to be involved with this world-class facility.”

Rebecca did not complete her thesis as her focus shifted to looking after her young family, but as her youngest approached school age, she returned to university to train as a teacher to pass on her love of science – especially chemistry, to another generation of students.

“I completed my Diploma of Education at La Trobe University in Bendigo and was keen to work at a rural school, given my personal background and current location in a small country town.” 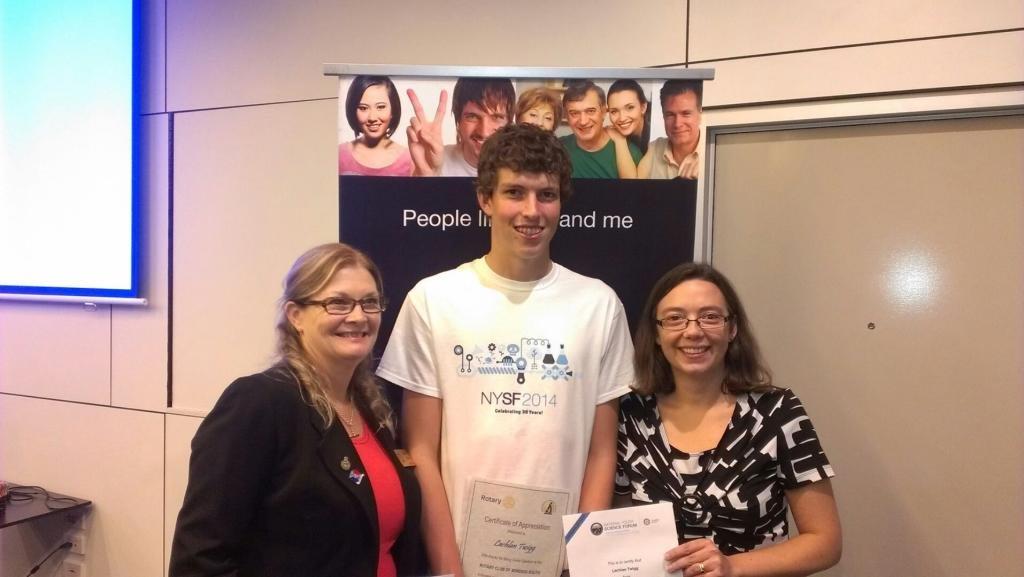 For the last five years she has been teaching maths, science and VCE (year 12) chemistry at East Loddon P-12 College, located in a farming area 40 minutes drive north of Bendigo. “The school teaches 240 students from prep to year 12, with one class of students per year level. This results in some very small VCE classes, with my chemistry classes ranging from one to four students.”

“One of my students, Lachlan Twigg, was particularly outstanding and I strongly encouraged him to apply for the NYSF. He took on the challenge and ended up attending the NYSF in 2014. He also thoroughly enjoyed the experience and in turn encouraged Sarah Collins to apply. She was selected to attend the New Zealand session in 2015, which was a huge experience for her as she was the first member in her immediate family to board an aeroplane, let alone travel overseas. Sarah also found the experience very inspiring and it encouraged her to not only finish Year 12 but go on to apply for university courses in agricultural science.  Both students said the highlight was definitely meeting other participants who were also passionate about science.”

“I hope to continue encouraging students to attend NYSF as the need for scientists and scientifically literate people continues to be an issue for Australia.”