The new Chair of the National Youth Science Forum (NYSF) governing Council is Professor Tanya Monro.  Her acceptance of the role marks a significant milestone in the life of the thirty-year program.

Professor Monro is an internationally acclaimed physicist, who is passionate about improving the community’s understanding of the relevance of physics in particular, and science in general.  And she is an alumna of the NYSF, having attended the program when it was the National Science Summer School (NSSS) in 1990. 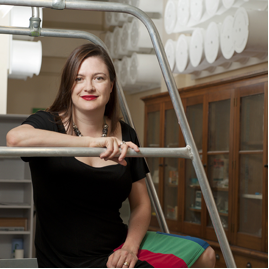 Professor Monro is currently an Australian Research Council (ARC) Georgina Sweet Laureate Fellow, Director of the Institute for Photonics and Advanced Sensing (IPAS) and Director of the ARC Centre of Excellence for Nanoscale BioPhotonics (CNBP) at the University of Adelaide.  She will take up a new role at the University of South Australia as Deputy Vice Chancellor, Research and Innovation in November 2014.

She says that outreach programs such as the NYSF play a critical role in supporting some of our brightest young people from around Australia by immersing them in stimulating science. “Australia's future depends on science and technology – we need not just scientists but also politicians, entrepreneurs and citizens working across the range of human endeavour who have an understanding of science and the scientific process.”

“The NYSF serves as a bridge between the science taught at schools and the world of science research and its application in our world. I look forward to working with the governing Council to strengthen the NYSF and its capacity to inspire Australia's students as they enter year 12.”

Of her own experience at the NYSF, Professor Monro says, “It was the first time I had the experience of being around other people my own age who were passionate about science. Engaging alumni in the program is a tangible way of showing the students some of the career pathways they might consider. One of the biggest insights from the program was that there were many fascinating fields of science that I had not previously discovered and that I should keep an open mind about what area I might want to specialise in until I had a chance to experience a few at university.”

Australia’s Chief Scientist and Science Patron of the NYSF Professor Ian Chubb congratulated Professor Monro on her appointment. “When we talk about inspiring students and getting our skills pipeline right, I can’t think of any person better able to do that than Tanya. I wish her every success.”

Damien Pearce, Director of the NYSF, says that the NYSF is delighted that Professor Monro has agreed to become the Chair of the Council.  “Professor Monro brings a wealth of experience and understanding of the science education environment both in Australia and internationally.  She has substantial knowledge of Australian industry and the priorities we need to be setting so that our science, technology and engineering workforce is well-placed to take us into the future.

“Professor Monro is a great role model for young women and men interested in study and careers in science and technology, which is the focus of the NYSF.  We look forward to working with her.”

Mr Pearce also thanked outgoing Chair, Dr Craig Cormick, for his guidance of the program during his time as Chair of the organisation.  “Dr Cormick’s insights and leadership were extremely valuable and we thank him for his commitment to the NYSF.”