Sense of community through the NYSF – Morgan Williams, NYSF 2009

For me the most valuable aspects of NYSF were the emergent phenomena – those which simply arise once you assemble 140-odd budding science enthusiasts under the same roof and take them to the frontiers of modern research.

I attended the NYSF in 2009 (Einstein), before completing a Bachelor of Global and Ocean Sciences (Hons.) at the Australian National University (ANU) – where I’ve since been working on my PhD at the Research School of Earth Sciences, which I hope to finish towards the end of next year. The NYSF certainly opened my eyes to what was actually possible for those of us who wanted to pursue STEM careers. However, for me the most valuable aspects of NYSF were the emergent phenomena – those which simply arise once you assemble 140-odd budding science enthusiasts under the same roof and take them to the frontiers of modern research. A sense of community arose from mutual curiosity and sincere excitement towards understanding how the world works (and a healthy dose of chanting). Of the many things NYSF offered, this was the most encouraging. Indeed, my interactions with the scientific community at ANU and across the world remain the most enjoyable aspect of my research today.

For my PhD, I’m currently attempting to constrain some of the geochemical systematics of seafloor hydration and subduction dehydration processes within oceanic crust. On a broad scale, these processes enable the generation of arc magmas within subduction zones, which are key to the formation and growth of the modern continental crust.

As part of this, I’m involved in an International Ocean Discovery Program expedition (Expedition 357: Atlantis Massif Serpentinization and Life), which recovered samples from near the Mid-Atlantic Ridge using seafloor drilling. Through this expedition I’ve already had opportunities to travel to Germany, Switzerland, France and Texas and to discuss my research with leading researchers across the world. My continuing work on rock samples recovered from the seafloor aims to constrain the evolution of alteration and hydration processes as the rocks are brought to the seafloor with increasing crustal extension. To do this, I’m using a novel combination of in-situ oxygen isotope (using SHRIMP), trace element, noble gas and halogen measurements.

Onshore science party for IODP Expedition 357 (I’m second from the top-right). The science party for the expedition is led by Co-Chief Scientists Prof. Gretchen Früh-Green (ETH Zürich, Switzerland) and Dr. Beth Orcutt (Bigelow Laboratory for Ocean Sciences, Maine, USA), and is distinctly multinational and multidisciplinary. Notably, the expedition is the first to have a female-dominated science party and one of the first to have two female Co-Chiefs. The 31 scientists conducting research as part of the expedition are from 13 different countries and include PhD students, post-doctoral fellows and tenured professors. Photo credit: V. Diekamp, MARUM

In addition to this, I’m working on relict oceanic rocks from Lago di Cignana (NW Italy), which have experienced the geological journey of a lifetime – from the Jurassic seafloor, through Alpine subduction (to ≈100km depth) before conveniently returning to the surface to be sampled by some keen geologists millions of years later. We’re using the relatively intact section of upper oceanic crust (consisting of altered seafloor sediments, altered basaltic rocks and underlying serpentinites) as a natural laboratory to investigate how, where and when hydrous fluids are ephemerally produced from metamorphic reactions as rocks are progressively subducted. By looking at chemical zonation of minerals growing as these fluids pass through, we can investigate changes in fluid composition (especially oxygen isotopes and trace metals) with successive pulses of fluids under different conditions. This gives us critical constraints on where fluids may have come from, which reactions might have generated them and the pathways they may have taken to get there – information we can put back into models and use to design new experiments to better understand how the system works. 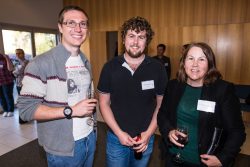 Morgan (centre) at the NYSF 2017 launch event in October

Beyond the realms of the PhD, I’ll soon be chasing opportunities for post-doctoral research overseas. Ideally I’d like to continue research at the intersection between isotope geochemistry and oceanic geoscience, applying new techniques to better constrain fundamental processes to better understand how our planet works. There are many options for continuing research within academic, governmental and commercial spheres, and I look forward to exploring some new horizons in the years to come (while having a good deal of fun in the process).