"I thought it would be pretty strict, but it’s the exact opposite."

The sun rose on 10 January 2018 over about 200 students at Emmanuel College. Many had made a sweltering 16-hour journey to Brisbane by bus the day before, but there would be no mercy from the sun during the day ahead.

First up, students met their interest groups, in which they will remain for the duration of the session, named after famous scientists including Fenner (biology), Mirzakhani (engineering) and Curie (chemistry). Interest groups are the basic units of the NYSF, within which students will conduct their laboratory and industry visits. Each group is presided over by a “staffie” sourced from previous NYSF sessions. Staffies are enigmatic creatures -- as secretive as they are enthusiastic, they bring an energy to the NYSF so powerful that the students will have to work hard to emulate it. 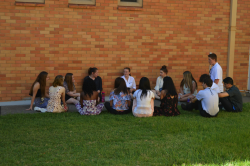 When I arrived we’d just had a 16 hour bus trip so we were completely demolished and really exhausted, but the staffies have got some intense energy and got us into a bit of a wild mood... 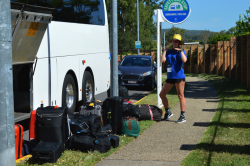 From there the students headed to the Opening Ceremony, where they heard from Rotary District Governor 9630 Elwyn Hodges, NYSF Board member  Professor Sally-Ann Poulsen and UQ Provost Professor Aidan Byrne. Mr Hodges has supported the NYSF through the Rotary organisation since the days when it was the National Summer Science School, and he has kept returning because of the incredibly positive influence he has seen it have on students.

Professor Poulsen talked about topics as diverse as exoplanet discoveries, malaria treatments, and dreadlocks on sloths. An accomplished chemical biologist and an alumna of the NYSF, she was strong in her praise of the program. “For me and many of the other eleven and a half thousand alumni, NYSF was a formative life experience … as students on this program your choices are central to mapping out the future prosperity of Australia.”

UQ Provost, Professor Aidan Byrne, explained that it is the brilliance of the students involved that has kept him coming back to the program since his days leading NYSF tours at the summer-scorched ANU campus in Canberra. According to Professor Byrne,  he was happy to assist in bringing the NYSF to UQ, and south-east Queensland. “The science and research ecosystem we find in Queensland is extraordinary”. This is, he says, a central reason why he chose to leave familiar territory down south and head to UQ. Rest assured, the Brisbane students are in good hands. 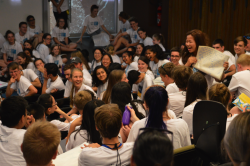 The students spent the rest of the day with Professor Tamara Davis, cosmologist, and Ellen Sima, the NYSF Programs Officer, who took them through a critical thinking workshop. The skills covered there will prove invaluable to the students over the course of the program, as they wade through the oceans of information they will receive. At night, the students let their hair down at swing dance classes. How can we old Comms Interns possibly keep up…?