“For the next two weeks take advantage of what you’ve been given. Take all opportunities with both hands and run with them.” On Wednesday, the participants in NYSF 2017 Session A were off to the Australian Parliament House for the official Opening Ceremony. After the "compulsory" group selfies outside of Parliament House and a wait in the queue for the security check, they found themselves inside the Main Committee Room for a series of talks.

The Ceremony began with Mr Andrew Metcalfe AO, Chair of the National Science Summer School (NSSS) board, who had some fine words for the students making the most of attending the NYSF: 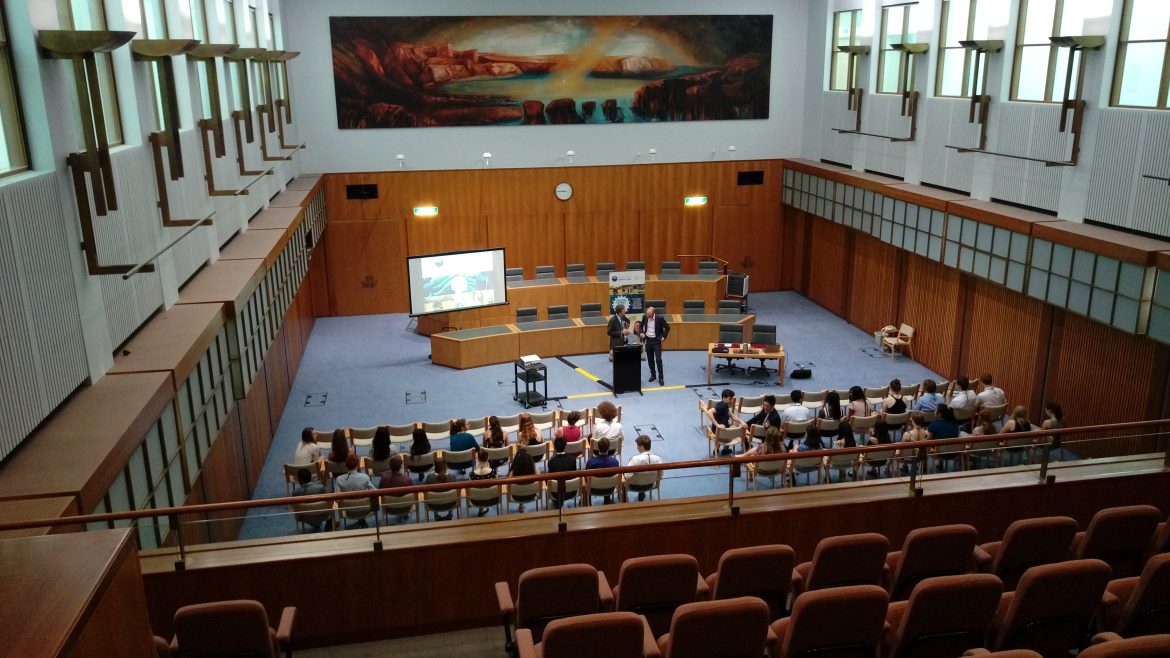 After introducing the program Mr Metcalfe handed over to Mr Steve Hill, Rotary District Governor 9710, who recognised the key role that the students play in the ongoing success of the NYSF, as well as the critical parts they go on to play for the future of Australia:

“The most important thing in the world is our youth, our youth is our future. Every Rotarian in the world now recognises that without the assistance of our youth, us old folks can’t do it.”

“We need you to carry on into the future and to make this world a better place. For the next two weeks take advantage of what you’ve been given. Take all opportunities with both hands and run with them.”

The students also heard from Dr Anna Cowan, Deputy Director of Education at the Australian National University (ANU)'s College for Medicine, Biology, and Environment, and the ANU College for Physical and Mathematical Sciences.

Dr Cowan has covered a lot over her extensive career, specializing in topics such as the central nervous system, cellular nervous systems, receptors and membrane biology, as well as other neurosciences. She is a renowned and esteemed scientist, and assured the students that they were in for good things by coming to the NYSF and following their passion in science:

“NYSF will be one of the most significant choices that will shape your future as a scientist. From my perspective, you’ve made the right choice. Not only in giving up your time over summer to attend the NYSF, but also in following your interest in science.”

“STEM underpins a differentiated and adaptable economy. And such an economy is what is required in our rapidly changing environment. Automation and technological enhancements will change the work force, however they will also create new jobs. Most of those jobs will require science and technology.”

Dr Cowan is also passionate about teaching and professional development, and dropped some gems that I’d be printing out and sticking to my wall if I were a student at the NYSF in 2017:

“The best scientists I know are those who are motivated by curiosity – by a need to understand their environment and who are driven by the opportunity which scientific knowledge provides to help humankind.”

“I challenge you while at the NYSF to find further insight into the world of scientific research. To exercise and expand your scientific curiosity, and to become an active and engaged member of the NYSF community. It is people like you, and your generation, that continue to navigate the challenges of our world. I wish you a fascinating and inspirational experience.”

After the formal proceedings the students headed off for tours of Parliament House, followed by mock parliamentary debates about energy policy.

The first lab visits for the students are on the horizon - stay tuned for stories of students doing some seriously sciency things.