NYSF 2017 Session A: This is CERN calling – come in Canberra

“We all work together in a constructive way, it’s a really nice place to be. It’s what the world should be like in a hundred years.”

One of the unique experiences of the NYSF program is a live video conference with Dr Rolf Landua, the head of the CERN education outreach group. The European Organization for Nuclear Research (CERN), is a research organisation that employs 13,000 scientists, engineers and IT specialists. They also operate the Large Hadron Collider (LHC) in Geneva, Switzerland. Students were able to ask Dr Landua questions about CERN, particle physics, and his general advice for those interested in pursuing STEM careers. 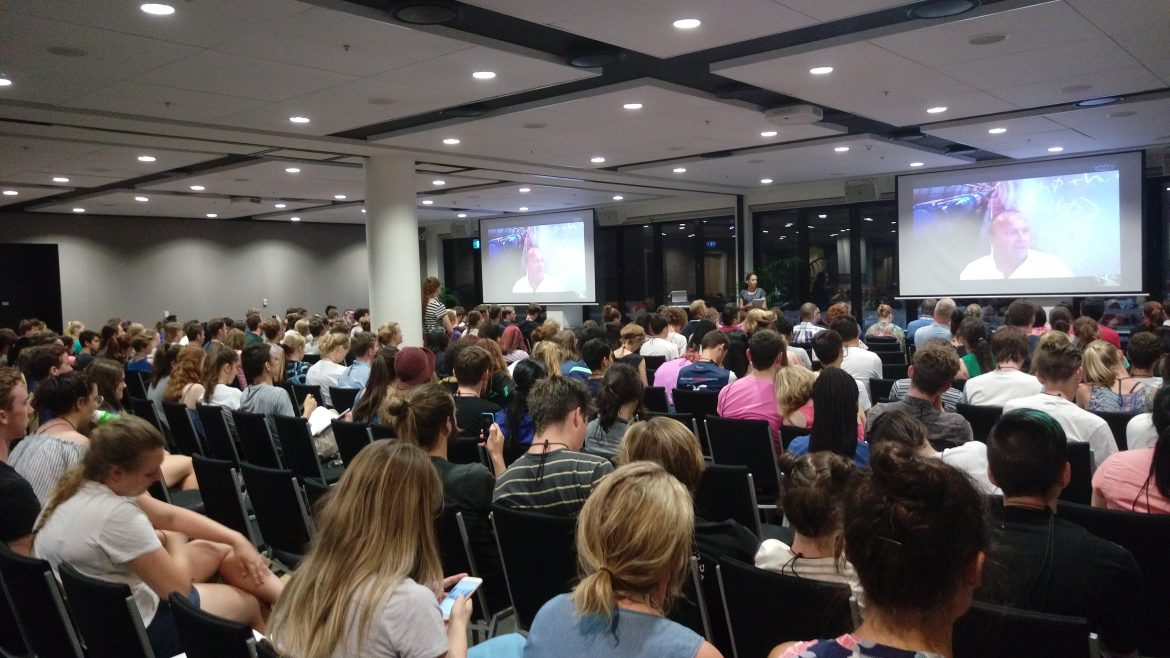 The Session A conference  began with a presentation from Aqeel Akber, a PhD candidate at the Australian National University’s department of nuclear science. Aqeel’s PhD research focuses on nuclear structures, in particular the structure of heavy ions. He has always looked at the world with a scientific eye, pondering the underlying physics. “Physics is absolutely a part of my identity,” he says.

Aqeel’s presentation personified particles, making particle physics more accessible for students who had limited background knowledge on the subject. “Particles are the fundamental requisite for [understanding] the greater,” he says, but he emphasised that it’s important to remember that particle physics is “not yet a theory of everything,” and that more research is required.

This is where CERN excels, with their 27 kilometre long circuit of superconductive magnets, they are able to accelerate protons to 99.9999991% the speed of light. You may have heard of the LHC through CERN's observation of the Higgs boson in 2013. A beam in the LHC consists of around 300 trillion protons, which may sound like a lot, but if these protons were stationary they’d only weigh a billionth of a gram. Due to their immense velocity, a beam of protons in the LHC is more energetic than a million speeding bullets. When two beams collide, scientists are given a brief opportunity to gaze upon the fundamental building blocks of our universe.

At 8:00PM in Canberra, or 10:00AM in Geneva, two hundred excited students were met by Dr Rolf Landua through Skype. Dr Landua has been working at CERN for 35 years, initially working on antimatter but more recently focusing on education outreach.

When asked about what it’s like to be part of such a dynamic organisation, Dr Landua said he was “really impressed by the diversity. For every question relevant to your research, you find someone who is an expert in it. We all work together in a constructive way, it’s a really nice place to be. It’s what the world should be like in a hundred years.” Students and teachers lining up to ask Dr Landua a question, while the rest of the Session A cohort watches on

Dr Landua believes that effective communication of science to taxpayers is of paramount importance. “They pay for our research, they’re basically our employers,” he stated.  A common question, Dr Landua says, is “what is particle physics good for?” Dr Landua and a large number of scientists are committed to researching particle physics to satisfy their innate curiosity, but the technological advances that have been made possible by their research are immense. The World Wide Web, Wi-Fi, and digital photography are all physical manifestations of man’s endeavour to satisfy our curiosity.