Meet our Communications Interns for the NYSF 2017 January Sessions

Four National Youth Science Forum (NYSF) alumni have been selected as this year’s Communications Interns, given the task of capturing the experiences of 400 students during the January Sessions.

As alumni of the NYSF program, the four interns will have a great insight into what students will experience during their time at the NYSF. Covering Session A is Jackson Nexhip and Daniel Lawson, and in Session C are Megan Stegeman and Veronica O’Mara .

Jackson Nexhip (NYSF 2013 alumnus) will be commencing his third year of a Bachelor of Advanced Science in Chemistry at the University of New South Wales (UNSW) in 2017. He also recently completed a year-long research project for a biomolecular design competition called BIOMOD.

BIOMOD is an annual undergraduate research competition in biomolecular design founded by The Wyss Institute at Harvard University. This year the competition was held at The University of California, San Francisco (UCSF) and capped at 24 entrants from universities from various countries including the United States, Canada, Germany, India, China, Korea and Japan.

In early 2016 Jackson set up the UNSW team, which was the only team from Australia and the southern hemisphere to compete this year.`

“Our project involved using a technique called DNA origami to build a nanoscale box which can capture specific molecular cargo – kind of like a nanoscale mousetrap. The box can capture cargo such as potent pharmaceuticals used in chemotherapy and can be modified to specifically deliver that cargo to diseased parts of the body, reducing non-specific interactions with healthy cells and minimising side effects”. 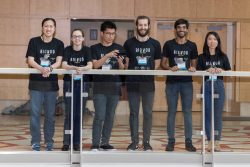 The five students on the UNSW team had to juggle the BIOMOD commitment with their university assignments and full-time course loads, while the other teams had the luxury of working on their projects over their summer break. In late October the UNSW team flew to UCSF for the final conference (a few weeks before exams), and took out the grand prize!

“Regardless of where we came in the official rankings of the competition, we had already won in our minds. The real experience of BIOMOD, and any other competition for that matter, isn't the prize you get at the end but rather the things you learn and the person you become along the way.

With that said though, the win was a nice cherry on top.”

You can view a 3-minute YouTube video summarising the teams entry Here, or visit the website with all of the teams work in detail Here.

Jackson said he was really looking forward to coming to the NYSF in January.

“It was extremely exciting and motivating to meet so many like-minded people at the NYSF, who were so incredibly passionate about what they do. Post-NYSF I found myself much more determined to become the best I could be in science and with science communication. And of course I also scored a heap of amazing new friends and an invaluable insight into university life and careers in science.”

“The NYSF is what you make of it. Turn up keen and ready to go hard and you will have one of the greatest times of your life.”

NYSF 2015 alumnus, Daniel Lawson, recently completed his first year of study at the Australian National University (ANU), majoring in physics and applied mathematics. He is focusing on undergraduate research and aims to make one quarter of his course load related to research for the next two years of his undergraduate degree. Daniel is also preparing to begin his second year as an undergraduate resident of Burgmann College while looking for more opportunities to inform students about STEM possibilities in the Canberra region. 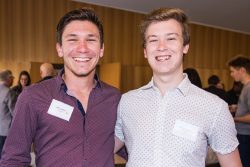 Daniel believes that the NYSF is best enjoyed with an open mind-set.

“Before I attended the NYSF I wanted to study engineering in Queensland. This changed when at the NYSF I was exposed to research opportunities which greatly influenced my study and career goals. The NYSF showed me the possibilities of scientific research, particularly during my undergraduate education. It was through an NYSF alumni that I discovered research focused degrees at ANU, in particular the PhD science program. Through the PhD program I’ve contributed to the SABRE experiment jointly run by the University of Melbourne and the ANU, with the goal of detecting dark matter through WIMP (weakly interacting massive particles) interactions.”  To find out more about the SABRE experiment click HERE.

Megan (Meg) Stegeman (NYSF 2014 alumna), is currently at The University of Queensland, studying a dual degree in Science and Arts, Majoring in Genetics, Psychology (and possibly journalism) and plans to complete a PhD after her Bachelor.  She hopes to combine travel with her career.

Meg said she is looking forward being a Communications Intern at the coming NYSF January Sessions.

“So excited to not only have a part in the program that helped shape my future, but to work behind the scenes and to get an idea of how much work and commitment is put in to achieve great outcomes.”

Veronica O’Mara (NYSF 2014 alumna), is about to start her second year studying Advanced Science and Law at the University of New South Wales (UNSW) following a gap year in England and Europe.  Her long term goal is to complete a PhD in genetics and work in medical research. 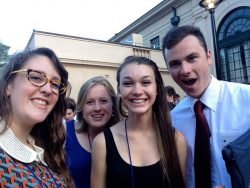 The NYSF experience helped Veronica shape her career goals and increase her confidence in public speaking.  And her advice to this year’s NYSF cohort?

“Make the most of it! It might seem daunting at first, meeting with hundreds of new people but as clichéd as it sounds, I met some of my best friends through NYSF. Also get involved in the lab visits, it really is a unique experience and gives you a taste of many fields. It’s a great opportunity to think about what you like and are interested in.”

NYSF 2017 participants are encouraged to say hello to the Communications Interns and talk with them about their NYSF experience.