If the chemistry is right…

Chemists or artists - what do you think?

A few days ago, the NYSF 2018 Session C students from the Curie interest group were shown through the campus of the Australian Defence Force Academy (ADFA) in Canberra, and guided through a hands-on blueprinting exercise which involved the synthesis of metal complexes and the use of their photochemical properties. This visit to ADFA was led by Cliff Woodward, a chemistry lecturer at the campus, who taught the students about chemistry in a way that made them excited to continue each step of their experiment. 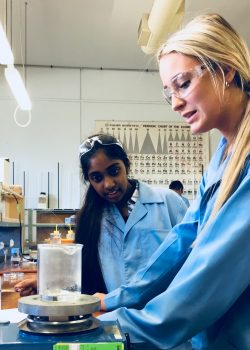 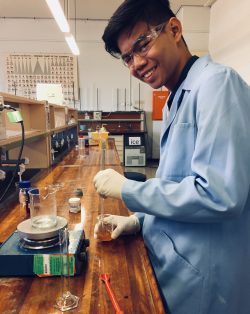 The photosensitive nature of the complex anion, i.e. a negatively charged ion, means that when exposed to light, it undergoes an intramolecular redox reaction in which the Fe(III) atom is reduced to a Fe(II). This was then used to make a ‘blueprint’. The Fe(II) species is detected by adding a solution of potassium hexacyanoferrate, which results in a deep blue colour.

The paper is exposed to light to create ...

The final product! Chemists or artists - what do you think?

Thus, to create their blueprint, the students first immersed absorbent paper in a solution of potassium salt, then placed opaque objects on the paper in any design they liked, and then finally ‘developed’ the paper by immersing it in a solution of hexacyanoferrate. The blueprint is then created by the deep blue affecting all parts of the paper, except where the opaque objects were placed.

During this visit, the students were also shown the lifestyle of an ADFA student, the facilities that they have access to, as well as some of the most iconic places on the campus, such as the Parade Ground on which the fallen members of any of the three services of the defence force are honoured.