As the NYSF 2016 cohort commences its final year of high school, we can reflect on the success of both Session A and C.

This year, the January Sessions offered a refreshed program that focused on three central ideas: engaging with STEM in action; understanding the role of STEM in society; and preparing the next generation of STEM professionals. Based on these three themes, students participated in a number of new labs, site visits and workshops.

Each session began with a welcome address by NYSF alumna and Chair, Professor Tanya Monro, Deputy Vice-Chancellor Research and Innovation at the University of South Australia, at the Opening Ceremony at Parliament House. Representatives from the local community also spoke, welcoming the students to Canberra. 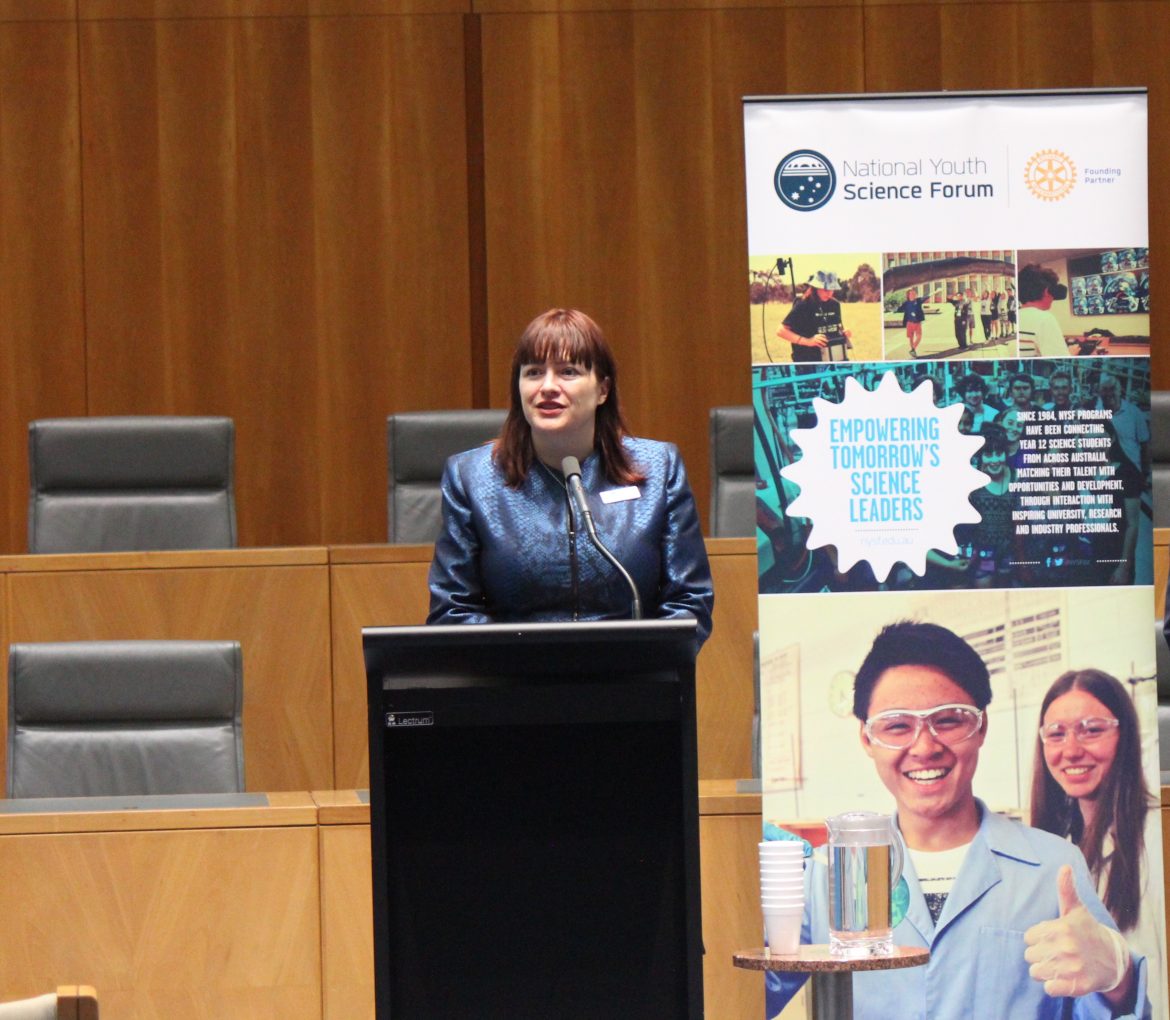 Workshops on ethics in STEM covered the ethics of climate change in Session A and was delivered by the ANU's Dr Janette Lindesay,  The Session C ethics workshop was presented by Professor Shari Forbes from the Centre for Forensic Science at the University of Technology Sydney and delved into ethics in forensic research using her work at Australia’s first body farm as a point of reference. 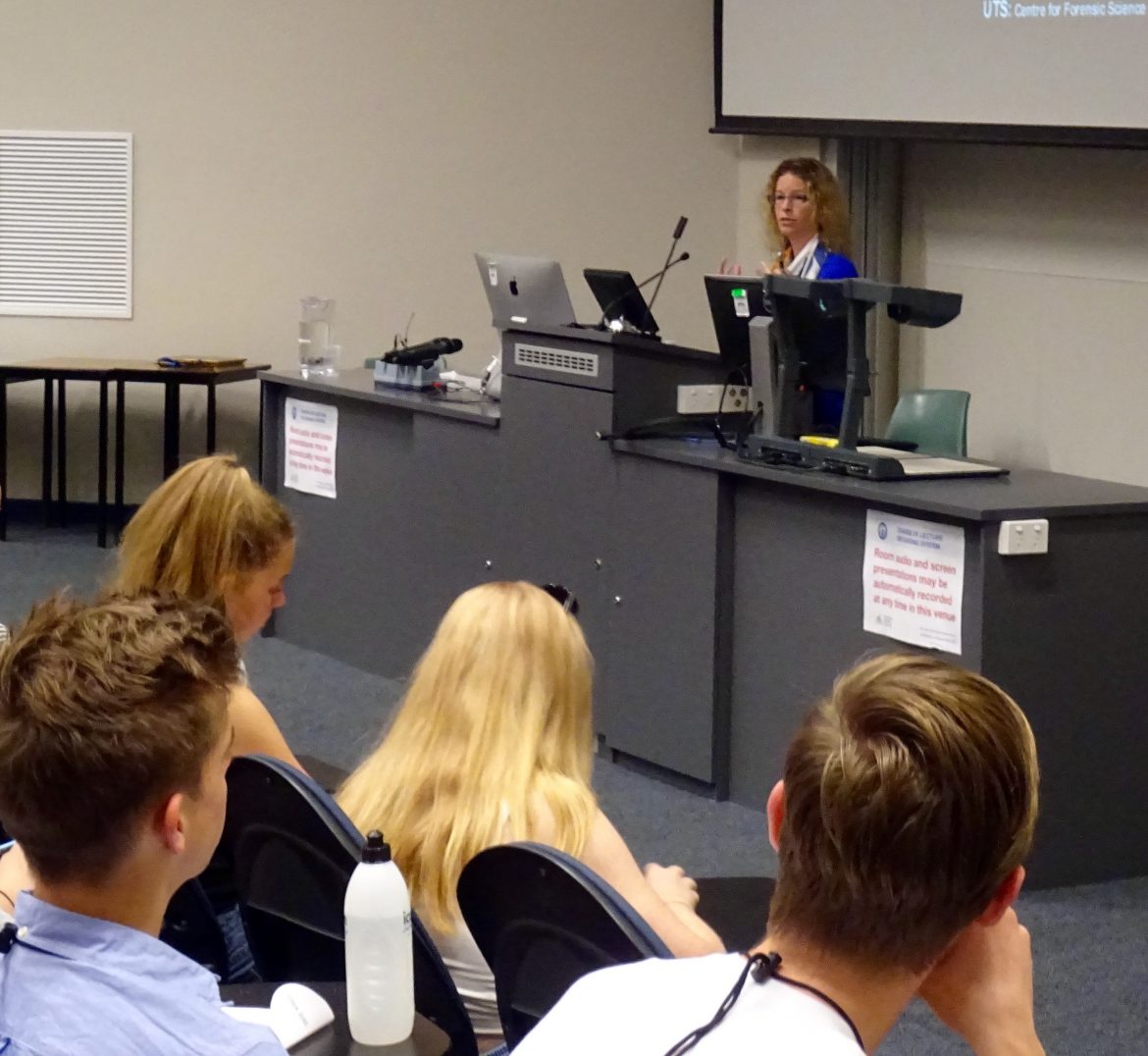 The issues relating to being an entrepreneur were discussed by an expert panel of business men and women from the ACT region - thanks Inspiring ACT! - who explained their experiences and some of the challenges they had to overcome. A facilitated workshop then gave the students an opportunity to develop and “sell” a product.

The Diversity in STEM seminar focused on some of the challenges in ensuring women and other minorities are represented in top STEM positions.

Skills to critically analyse information were tackled through an interactive discussion through the Critical Thinking seminar. And the highly successful and informative Speed Date a Scientist session proved popular with students in both sessions. This session was designed to help students learn about how to find their own career pathway, with advice from those who currently work in their chosen fields.

New to the program was a visit to the iconic The National Film and Sound Archive where students learned the science behind audio-visual preservation. 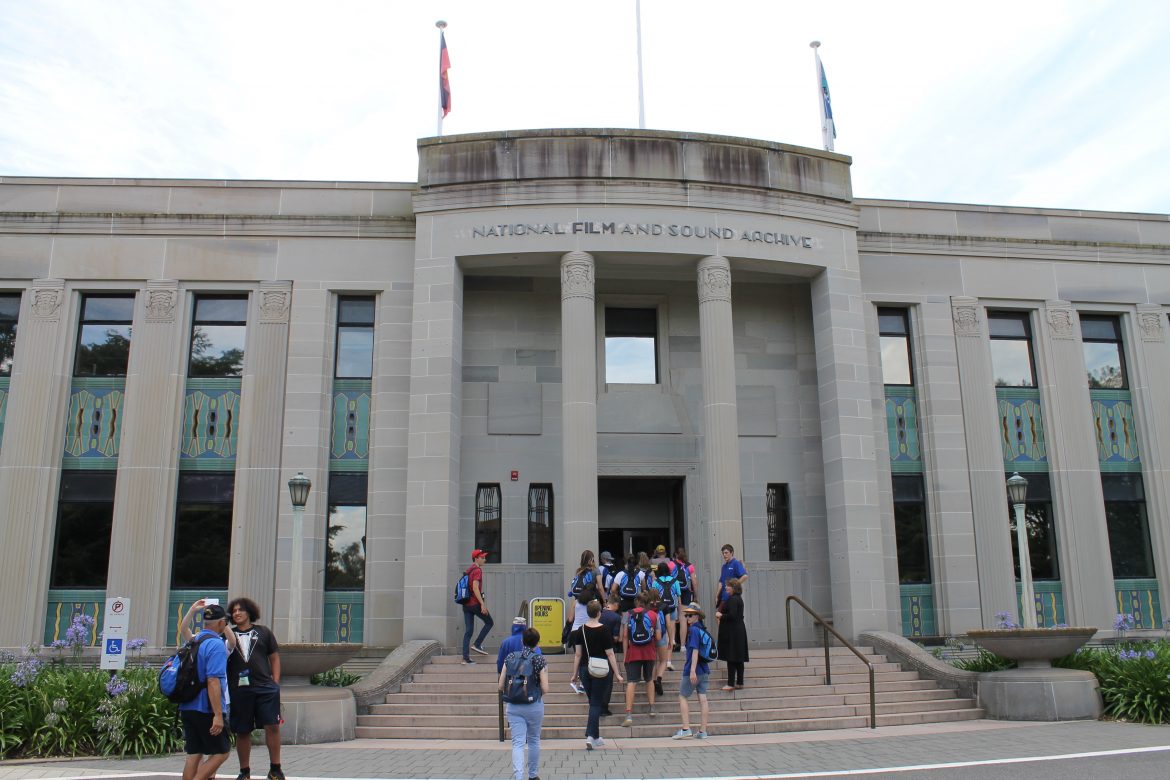 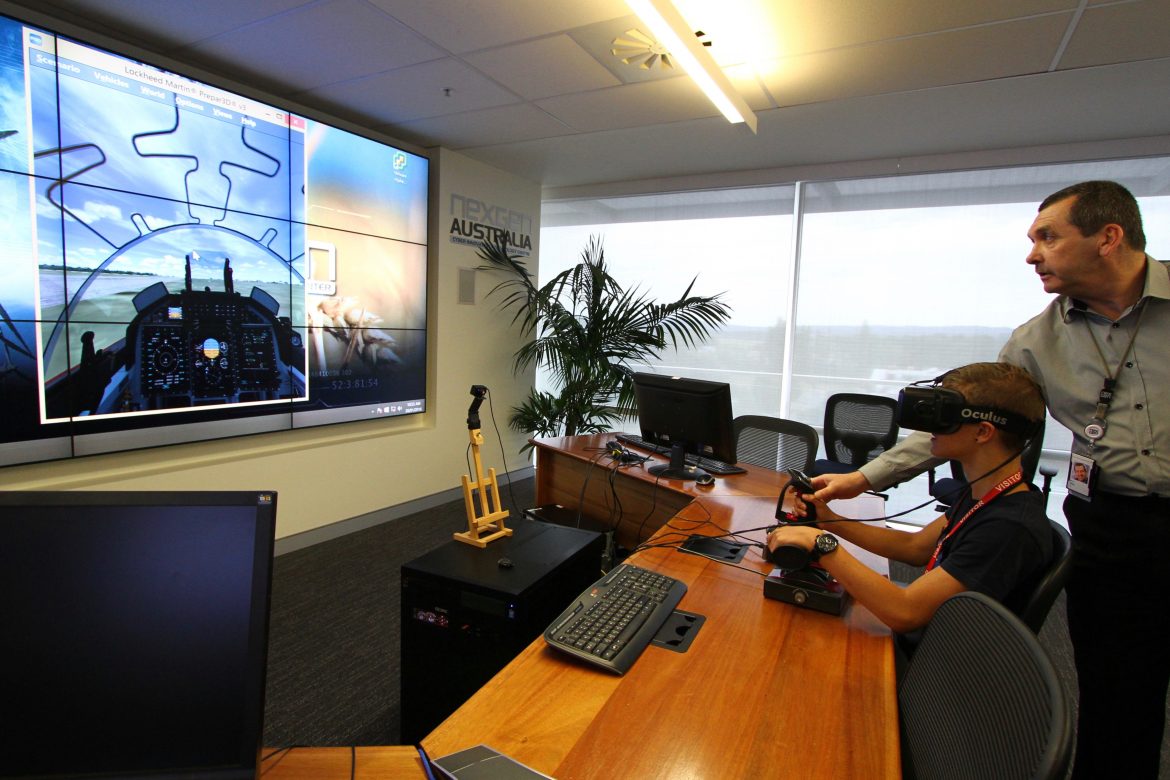 In total, 196 site and lab visits were conducted over the course of the two NYSF 2016 January Sessions. Our sincere thanks to The Australian National University, our host university in Canberra, as well as the many other facilities that hosted our student visits during the program.

There was also time for socialising and networking at the two science dinners. The ANU’s recently appointed Vice-Chancellor and Nobel Prize winner Professor Brian Schmidt addressed the students of Session A on his “three big questions” while Dr Ranjana Srivastava, author, academic and oncologist addressed the students of Session C about the personal and clinical challenges of caring for patients with cancer.

Session C Rotary dinner guest speaker featured 1988 Alumni Subho Banerjee, Deputy Secretary at the Department of Education and Training. Subho asked the students consider the roles of excellence, boldness, contribution and kindness in their futures. At Session A’s Rotary Dinner, Dr Heather Bray (Alumna 1987) a Senior Research Associate at the University of Adelaide reflected on her career to date, taking her from research scientist to science communicator to researcher again. She also raised the issue of mental health in academia in an inspiring speech. 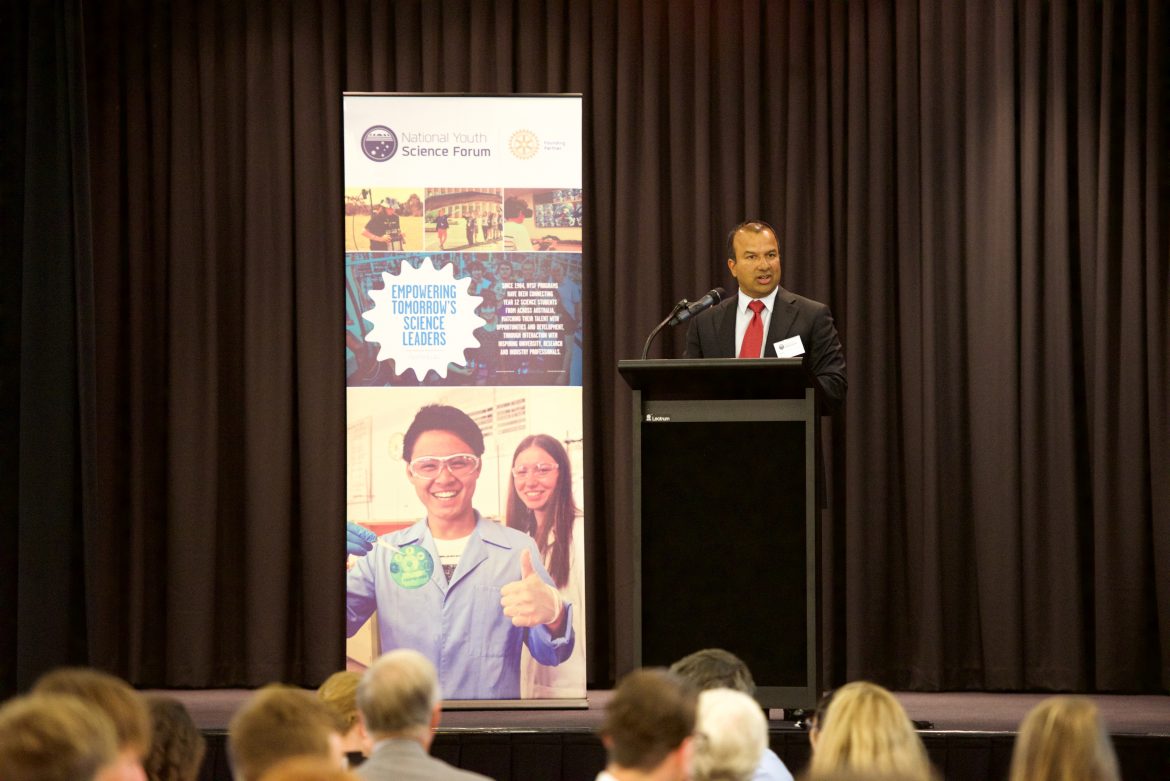 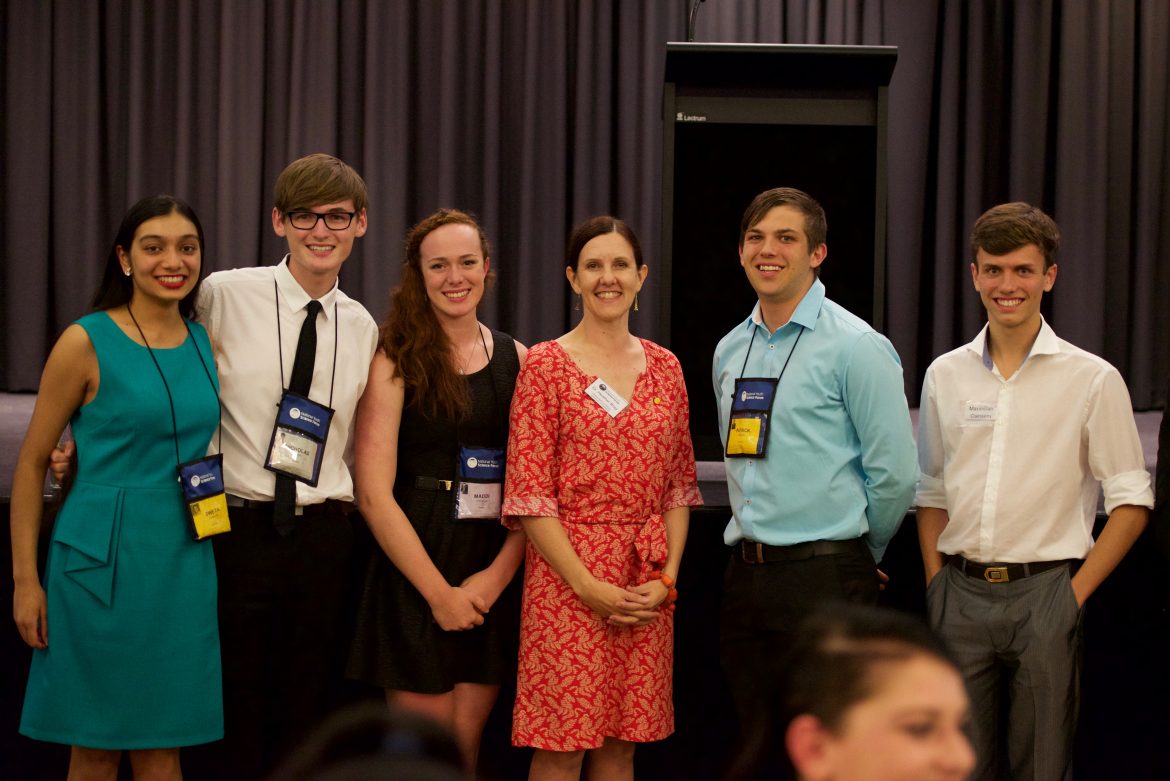 Our programs were featured in the media many times during the NYSF 2016 sessions.

WIN Television News interviewed Rose from Tasmania and Tim from Armidale, NSW, and the story was included in their national regional news program. Kaliopi from Canberra was interviewed by the Sunday Canberra Times; and Patrick from Woolgoolga, NSW and Grace from Camberwell, Victoria were interviewed by ABC Radio’s 666 Canberra, which was also featured on programs across Australia. ABC Radio’s 666 Canberra interviewed Dr Heather Bray about her address to students, and Dr Rish Ratnam talked to ABC Radio’s 666 about the session on entrepreneurship. The National Science Teachers Summer School was featured in The Canberra Times when they visited award-winning teacher Geoff McNamara at Melrose High School.