“We never considered that programming and coding were part of growing food, and that technology was such big part of farming.”

Did you know that wheat, maize and rice make up 60 per cent of the world’s population energy intake? With the world population on the rise and the ever-increasing demand for Australian grain, scientists and farmers are working to breed better varieties and develop new and improved farming technologies and techniques. It's all about producing high quality and high yielding grain crops - sustainably.

At the National Youth Science Forum 2016 program, students had the opportunity to participate in the Grains Research and Development Corporation (GRDC) session, which explored the science behind growing great grain. This session was all about hands-on science. 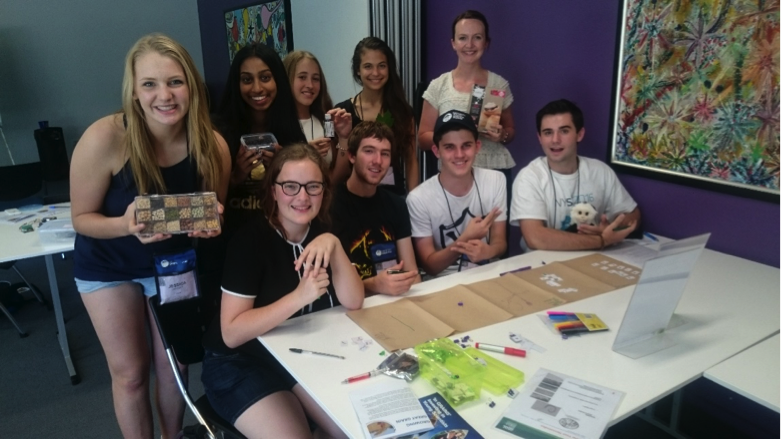 Students started by getting the dirt on soil, looking for nematodes and assessing soil health, testing soil permeability and emulating ‘in the field tests’. Students then delved into the genetics of plant breeding, conducting crosses to develop superior wheat plants and getting creative designing their own futuristic species.

Our hands-on programming session gathered a lot of interest, with students able to use smartphones to pick up temperature readings from frost sensors they built, while others honed in on drone technology with an insight into unmanned aircraft use for monitoring crop health. Our focus was showcasing the 'STEM' (science, technology, engineering and maths) in the Australian grains industry.

The GRDC session finished with hands-on grainy food science, where students extracted gluten from dough and conducted a sensory analysis of bread products. Students explored the role of proteins and chemistry in food production. NYSF students getting hands on with grainy food science

The packed session was highly enjoyable, with many students learning to appreciate a side of primary industries that they had not considered before, discussing the scientific challenges of growing grains in Australia and enjoying the journey, from seed to store.

Our favourite quote was, "We never considered that programming and coding were part of growing food, and that technology was such big part of farming.”

Story and images by Sarah McDonnell from AgCommunicators.