Who dunnit? A forensic investigation

You will never once see them refer to “blood”

It’s time to gown up, pop gloves on, don your facemask and goggles, and hit the crime scene house, or “Casa de Crime”, at Canberra Institute of Technology. Join NYSF students as they analyse crime scenes, dust for fingerprints, and assess skulls different head wounds. 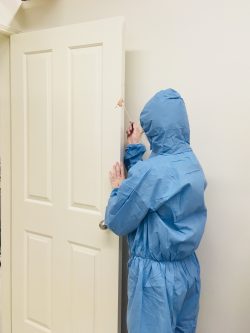 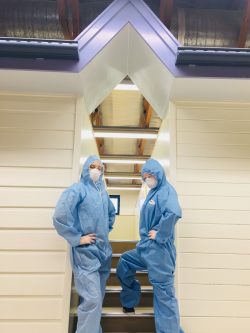 Forensic science begins at a crime scene and may end in a court of law, and involves assessing:

The exercise set for the students involved going into the burgled “crime” house to assess the situation and find the culprit. The first thing that students noticed was that the burglar had forced entry in through a window and snagged their hair on the way, which was collected in a paper envelope for lab analysis. Students were very observant as they took note of objects lying around and anything suspicious.

The next step was to collect a sample of a blood-like stain that had been left on the door on the burglar’s way out. Note that in the report of a forensic science investigator at a crime scene, you will never once see them refer to “blood”, but rather a “red-brown stain”. Forensic scientists perform a presumptive test at the scene that involves oxidation, however human blood isn’t the only thing that will come back positive – animal blood, apple, horseradish, and anything else that oxidises - will test positive too. Students watched the “Hemastix” strip detect the oxidative activity of hemaglobin in the blood turn the strip from brown to green. However, a sample can’t be referred to as “human blood” until it has passed a confirmatory test in a lab.

Watch this video of the haemoglobin test.

Lastly, the biometric specialists came in to dust the area for fingerprints. To do this, fine powder is brushed over, and particles adhere to the residue left by friction ridge skin on fingers. Students used the fingerprints they collected and matched them to suspect fingerprints to determine the culprit.

Magnetic powder can also be used to develop the print, which has left chance of damaging the print as the magnetic applicator, as opposed to the bristles of a brush, do not touch the surface. Students used magnetic powder to reveal their own fingerprints.

Students also had a chance to view the impact to skulls with various head wounds, and also looked at differences between skulls from different ethnic backgrounds. 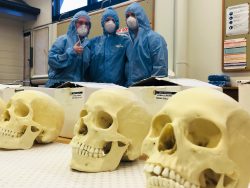 Thank you to Rachael Paton (Biometric Technology Specialist), Genevieve Williams (technical officer), Liz Gordon (Bachelor of Forensic Science graduate), and Sam Botral (Bachelor of Forensic Science student), who took the time to guide us in our investigations.  For those interested, CIT offers a free online course on biometric technologies that can be accessed here: https://www.canvas.net/browse/canberrait/courses/biometric-technologies. 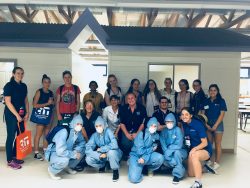 …and that marks CASE CLOSED!