Here at the NYSF we love to see all of our NYSF Alumni following their passion in their studies, careers and communities. It’s also fantastic when they are formally recognised for their hard work and over the past months a number of NYSF Alumni have been recognised with formal awards and scholarships.

Simon McKenzie (NYSF Alumnus 2010), who is currently completing his PhD with the ANU in the field of computational chemistry, has received a Westpac Future Leaders Scholarship aimed at supporting exceptional students pursuing post-graduate study. The scholarship includes a nine-month leadership development program as well as an international experience for up to six months. 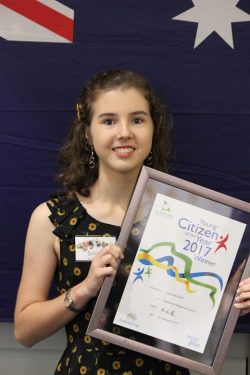 Several former NYSF participants have received Young Citizen of the Year awards in their respective regions. Jasmine Elliot, who completed the program this January, has been named Young Citizen of the Year by the Gladstone Regional Council at the Australia Day awards ceremony on the 25th of January. Jasmine is involved in several groups including the Gladstone Region Youth Council and the Headspace Youth Reference Group. She is also nominated for another award in the Access Community Services and Multicultural Youth Queensland Cultural Diversity Awards which will be announced on May 5th.

Within his own region, Phillip Johnson (NYSF Alumnus 2013) was named Young Citizen of the Year by the Newcastle City Council. This is thanks to his advocacy for students on a range of different issues. Phil currently attends the University of Newcastle, studying Civil Engineering, where he has taken on the role of Student Association President.

Katie Rae (NYSF Alumna 2014), who is an active member of the Toowoomba Guiding Community, has also been honoured with the Young Citizen of the Year award within her own region. And in the region of Cowra, it was Maddison Johnson (NYSF Alumna 2016) who took out the same award owing to her representation of Cowra at several local, state and international events. Maddison has been an active Youth Council member for the past 3 years, was lucky enough to be chosen as one of just six Australians to attend the United Nations Global Youth Leadership Forum held in the United States and was the Lions Youth of the Year and Youth Peace Ambassador in 2016.

Ben Kenworthy (NYSF Alumnus 2016) is one of 14 year 12 students featured in an ABC TV documentary, My Year 12 Life. The program follows the 14 students through their year 12 at high school via a video diary. Insightful and informative, you can catch it through the various ABC TV platforms. 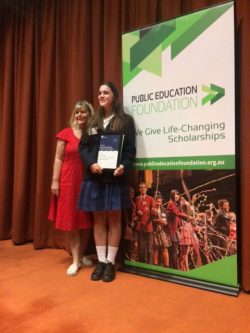 We would like to congratulate all of these alumni for their outstanding achievements.