“NYSF was a turning point for me” – NYSF Alumnus Chris Hatherly

NYSF was a turning point for me, but perhaps not in the same way as it was for others

Chris Hatherly is the Director of Science Policy and Projects at the Australian Academy of Science. His journey into science began in 1996 at the National Youth Science Forum.

Almost 20 years on, the specific memories are hazy, but the overall impression is still clear: what an opportunity, what a privilege and what a monumental couple of weeks developing lasting friendships and shaping a future.

NYSF was a turning point for me, but perhaps not in the same way as it was for others. Like everyone, I’d come to NYSF with interest and aptitude for science, and like most, I wasn’t entirely sure how these interests might pan out into further study and eventually a career.

But rather than narrowing my focus, the range of science on show during NYSF left me less certain than ever about what I wanted to do. What had become clear though is that whatever further study I might do, ANU was the place I wanted to do it.

So with that in mind, I finished year 12, deferred a Science/Arts degree, and headed off on a gap year: in my case, pedalling a bike around Australia.

I returned to the ANU in 1998 and experienced all the delights of first year, but the travel bug had got me, and a year later I deferred again for more travel: first with a friend on an 18-month bike trek across Russia and Mongolia, then a few years later with my wife along the Silk Road from Istanbul to Hong Kong. 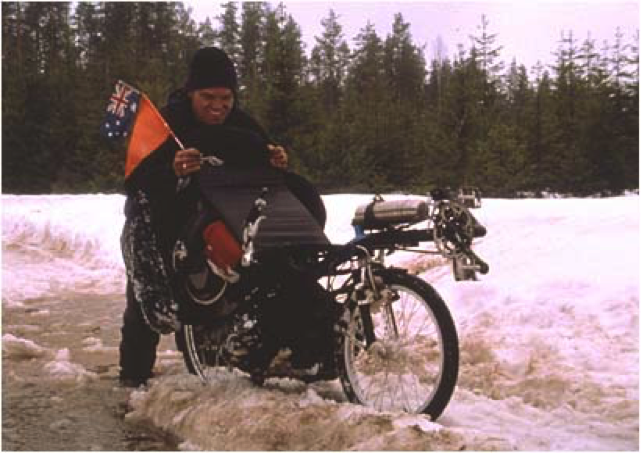 These were great experiences cementing life-long friendships, learning new languages, seeing places un-visited by westerners for decades, and landing travel awards, a successful book and a documentary along the way.

But the fascination with science was still there, and over time (and with a number of detours along the way), this coalesced into a degree with honours in psychology, and eventually a PhD in cognitive science. All of this at the ANU which I’d first fallen for during NYSF some 14 years earlier.

And then the real world!

My first job took me out of academia to management of a research-funding program at Alzheimer’s Australia. Over the course of five years my responsibilities expanded to include a high profile ‘knowledge translation’ program, and involvement in a targeted and strategic program of research advocacy. These roles gave me the opportunity to work closely with leading health and medical researchers on cutting-edge research projects, and also at the interface between science, public awareness and government policy.

And finally, back to science proper, commencing a job in 2015 as Director of Science Policy and Projects at the Australian Academy of Science (a supporting organisation of NYSF).

The breadth of issues I now deal with is much larger than at Alzheimer’s Australia, and the calibre of scientists I have the opportunity to work with couldn’t be higher. But the overall challenges remain the same: ensuring science informs government policy making on the one hand, and working through a variety of channels to try and persuade governments to do more science on the other.

It’s not where I imagined I’d end up during my January at NYSF nearly 20 years ago, and it’s not how I imagined I’d get there. But for someone with a broad and lifelong interest in science, I couldn’t be happier."