A Beginner’s Guide in Believing in Yourself: An Afternoon with Nobel Laureate Professor Peter Doherty

The NYSF Year 12 Program is renowned for the unique and life-changing experiences it provides for its participants. One of the most exceptional of these experiences is the Nobel Laureate Lecture – how many high school students have the chance to attend a live presentation from a Nobel Laureate and ask them questions about their STEM career and life journey? And how many have this amazing opportunity not once, but twice?!

The first of our Nobel Laureate Lecture series this year was delivered by Immunologist Professor Peter Doherty AC, FRS FMedSci, Patron of The Peter Doherty Institute for Infection and Immunity, who along with Professor Rolf Zinkernagel AC, FAA  of Switzerland, received the  Nobel Prize in Physiology or Medicine in 1996 for their discovery of how the body’s immune system distinguishes virus-infected cells from normal cells. Professor Doherty was Australian of the Year in 1997 and is also a distinguished author, with books including The Beginner's Guide to Winning the Nobel Prize, Pandemics: What Everyone Needs to Know (in 2012..) and most recently An Insider's Plague Year.

Following a Welcome to Country from Student Staff Leader Keeley and an introduction from NYSF CEO Dr Melanie Bagg, Professor Doherty delivered an engaging talk that provided an insight into his own personal STEM journey, followed by a live Q&A session with the student audience.

Professor Doherty recounted the story of his own career and how he came to be where he is today, interspersed with a plethora of tips and pieces of advice for the young NYSF audience, and shared his own thoughts on a variety of issues, covering everything from the current COVID pandemic and climate change, to social issues, general life advice, and social media! 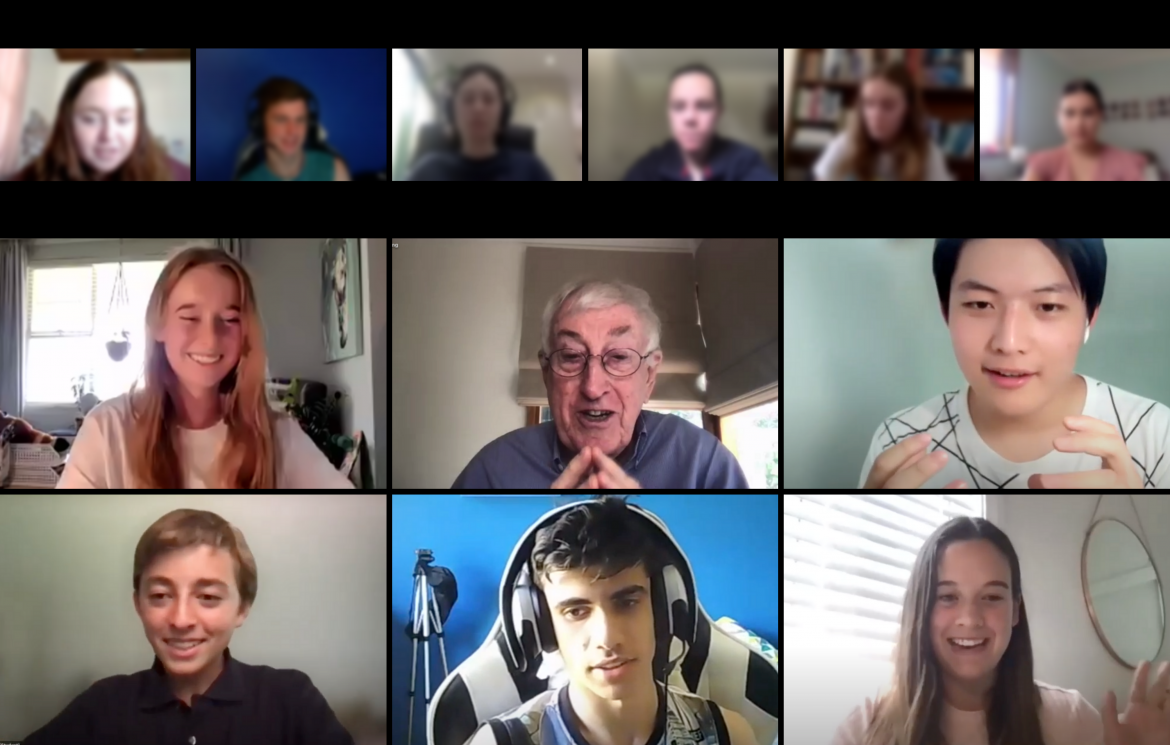 In his opening, Professor Doherty provided some holistic thoughts on careers in STEM, and in trademark humility, described his own Nobel prize-winning work as “naïve”, while adding some pearls of wisdom and encouraging NYSFers to not be intimidated and to believe in their own ability.

"The experiment that won us the Nobel Prize wasn’t a very good experiment! It was probably done for the wrong reason and it was very naïve. But it’s what we did with the information that came back from that experiment and what we made of it and where we took it next, that got us the Nobel Prize."

“So, this is a world where you must engage with what you’re finding, be instructed by nature, be open-minded…don’t be intimidated if what you find seems contrary to what important or powerful people are saying, because the fact of the matter is…a young graduate student can make a discovery that can show that what a Nobel prize winner has been saying for decades is, maybe not completely wrong but maybe half-wrong!"

Professor Doherty’s own unconventional career pathway, where he studied to be a veterinarian and later changed fields to immunology, along with many other stories he provided of various working colleagues, highlighted to the participants the various ways of getting into different scientific fields, and no one path you must take. He also encouraged the participants to be open to change and new opportunities.

“A science beginning can take you in many different directions…if you are open and interested and curious, you may end up doing something very different [to what you initially planned] …this often happens in science”

Professor Doherty also spoke about the interdisciplinary nature of science in the modern world.

“Increasingly, all science is coming together, all types of scientists are working together...there are many types of activities that involve teams of people with very different types of personalities!”

Illustrating to the participants just how much things have changed since he was growing up in the 1940’s, Professor Doherty explained how he learned to write on stone tablets and had to wash it off with a rag and water – a long way removed from the electronic tablets of today!

When asked by NYSFer Xavier how his career changed after receiving the Nobel Prize, Professor Doherty explained that it enabled him to be a more public figure and to use that spotlight to “speak up for science”, and he encouraged participants to do the same!

“You can all speak up for science because you can use social media, and if you have great experiments, especially if they are visual…put them up on YouTube, get it out there, get people to see it."

“There is great democratization of information, which your generation knows how to use much better than I do – I make a fool of myself on Twitter!"

It was clear from the many insightful questions that the participants were engrossed in the presentation and thoroughly enjoyed hearing about Professor Doherty’s perspectives on science and the world.

After a heartfelt message of thanks from NYSFer Makadde, Professor Doherty left participants with a final message.

“It’s been a pleasure to talk to you, and I wish you all great careers. But, also be happy and have a life as well, that’s also important!”

We wish to send out a huge thank you to Professor Doherty for sharing his inspirational story with our 2022 cohort, and allowing them to tap into his wealth of knowledge which will no doubt be invaluable as they forge their own way forward in their STEM careers.