Five NYSF alumnae accompanied Madeline Cooper, NYSF’s Manager, Programs, to the Connecting Women in STEMM (Science, Technology, Engineering, Medicine and Maths) symposium held in Melbourne in September. The event aimed to share best practices and policies in academia and industry as well as featuring leading initiatives that aim to foster an environment where more women in STEMM can lead and excel.

Over the two days there were a range of panels and speakers, focusing on topics such as entrepreneurship, how to engage girls in STEMM, and the variety of career paths open to women who are interested in Science. 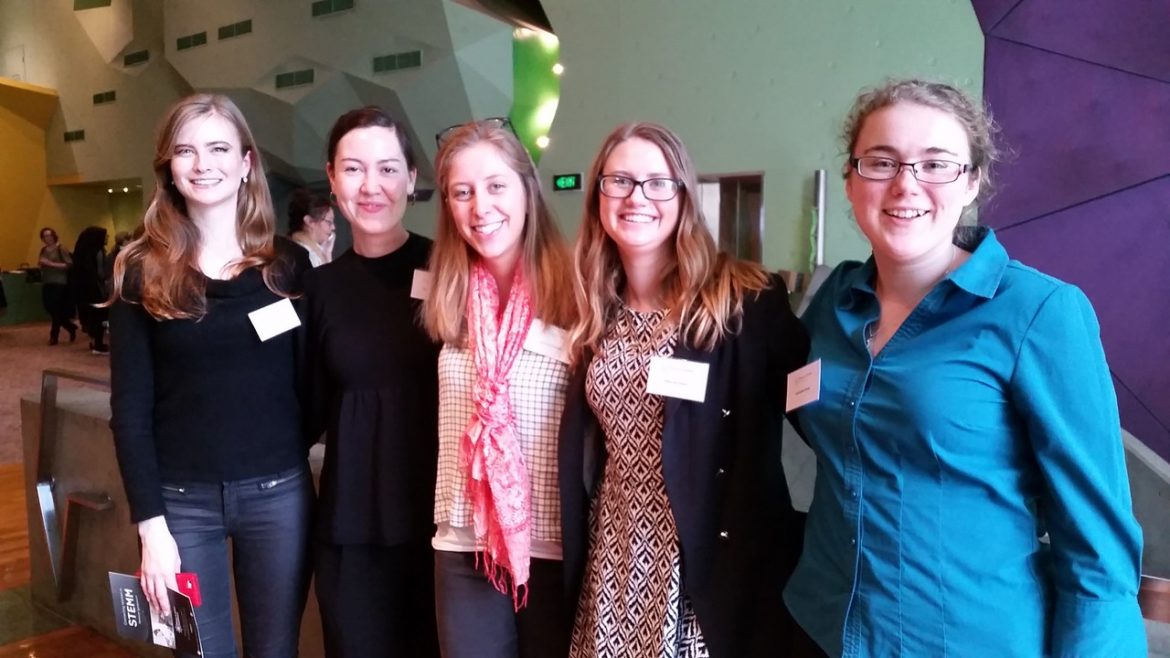 Anne-Aelis, Tayla, Karli, Ellen and Charlotte represented the NYSF at the Women in STEMM Symposium in September

“Roughly 60% of those who attend the National Youth Science Forum (NYSF) January Sessions are female - young women who are deeply interested and engaged in STEM,” said Ms Cooper. “Attending the conference gave some great ideas on topics to incorporate into our educational programs so that we can better support these young people in their future careers, as well as an overview of the current ‘state of play’ in STEM research and industry.”

“It’s important for the NYSF to be engaged in this space, and to make connections with people and organisations who are similarly committed to empowering young people, particularly young women, to pursue careers in STEM. Attending events such as the Women in STEMM National Symposium helps us do that.”

The full program can be viewed at https://womeninscienceaust.org/national-symposium/program/.

NYSF 2012 alumna, Anne-Aelis Perfrement, says that she took a lot away from attending the symposium. “I’d like to thank NYSF for sponsoring NYSF alumnae such as myself to attend the event. It was wonderful to make new friends and reconnect with other NYSFers.”

Anne-Aelis added, “The Symposium broke down many of the preconceived notions I held of women in STEMM and their career paths. I now have much more confidence going forward, as I saw with my own eyes that there is a will to help one another and a will to build Australia. As a young woman, this is the strongest message I took from the Symposium.”

Karli Williamson, NSYF 2014 alumna, saw the importance of encouraging more women and girls to engage in STEM related fields during their education and later on in the workforce.

“When so many health related issues are killing thousands of Australians each year, and putting a larger and larger dent in the economy, why wouldn’t we want Australia’s brightest and most innovative young people to study STEM? But instead, we hear that girls are turning away from STEM because they lack the confidence to study subjects that seem challenging, and fall into humanities-based university degrees, and hence, workplaces.”

“(You should) encourage the girls in your life to participate in STEM programs and subjects. If people don’t acknowledge the gender disparity in STEM, call them out. If you know a woman in science, be her champion,” Ms Williamson said.