Representatives from the National Youth Science Forum (NYSF) were honoured to be invited to participate in a roundtable discussion in Canberra in August, led by Dr Keoki Jackson, Chief Technology Officer of Lockheed Martin. Dr Jackson was in Australia for a series of meetings and to announce the company’s new investment in Australia’s R&D community, through the establishment of the STELaR Lab in Melbourne, to be headed by Dr Tony Lindsay.

The $13million investment in the STELaR Lab will support a variety of research programs including hypersonics, autonomy in robotics, quantum computing and communications and data analytics to be conducted at the Melbourne site, providing opportunities for Australian PhD students. Australia was selected for the establishment of STELar Lab after a world wide evaluation of prospective locations.  This investment is a nod to Australia’s credentials as a smart nation investing in and driving growth and prosperity through innovation and science. 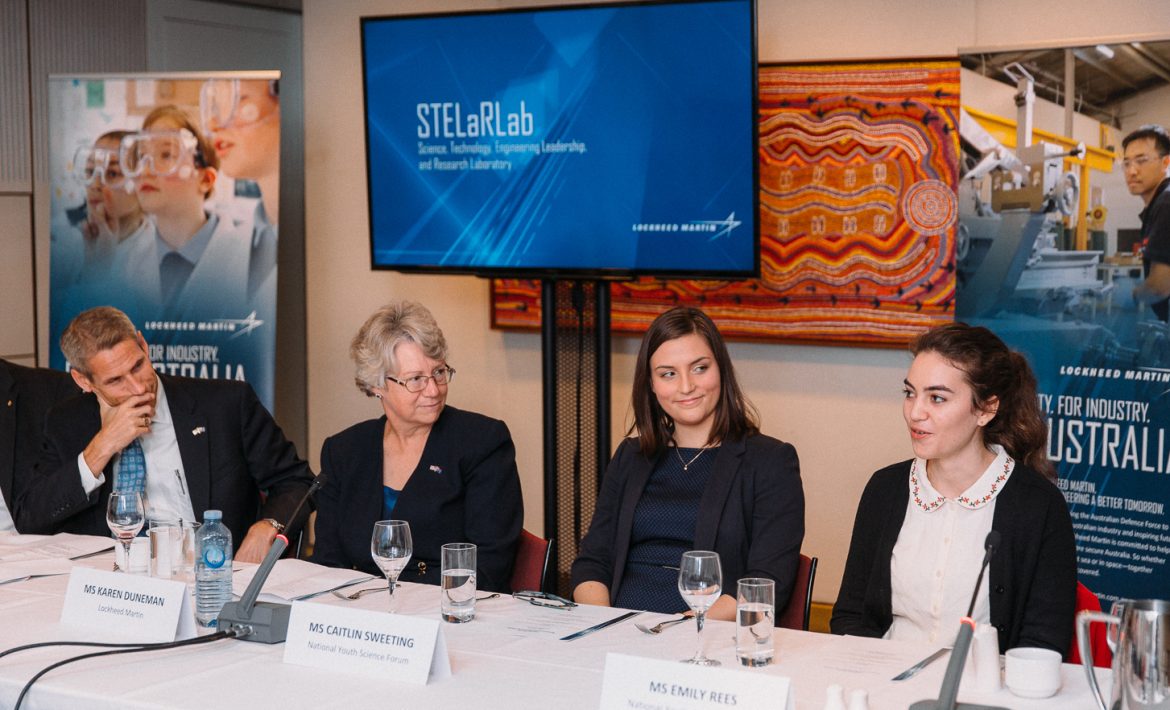 Ms Karen Duneman, Lockheed Martin's Director of Global Science and Technology Engagement and a senior and long-standing Lockeed Martin employee, spoke to the group about her experience as an engineer, and Lockheed's commitment to a diverse workforce.

The NYSF was represented at the event by two alumni, Caitlin Sweeting and Emily Rees, who were invited to share their experience of attending the NYSF and the benefits it offered.

Caitlin, a graduate of Curtin University's Bachelor of Engineering (Petroleum Engineering), attended the NYSF in 2011. "Motivated by my experience at the NYSF,  I went on to study engineering after high school and graduated in 2015. During my degree I undertook engineering internships at both Woodside and Shell Australia to gain valuable industry experience. As a university student I was also selected to attend the International Petroleum Technology Conference (IPTC) Education Week in Kuala Lumpur in 2014 to compete in a project team made up of students from all over the world. Additionally, I was awarded the Engineering Australia (WA Division) Digby Leach medal for the best overall course performance in Engineering at Curtin. I am currently undertaking a graduate program at Shell Australia specializing in Reservoir Engineering and am a member of the Society of Petroleum Engineers."

Emily is currently studying engineering at The Australian National University. She attended the NYSF in 2014, and decided to apply for the ANU as a result of her participation in the program. Previously, she had not even considered studying inter-state, but was particularly attracted to the ANU because of its undergraduate research study opportunities.

In the Engineering R&D course, Emily has undertaken projects on semiconductors and green nanotechnology. She is also a student ambassador for the ANU, is involved in the Engineering Association, the ANU’s Solar Car initiative, the debating club, and is a mentor and committee member of Fifty50 - which promotes gender equity in the ANU’s College of Engineering and Computer Science (CECS).